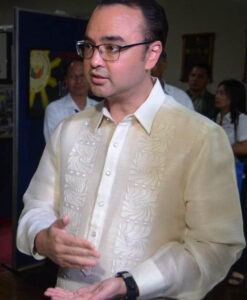 The Nacionalista Party senator said he and his sister, Senator Pia Cayetano, dined with Duterte for three hours on Tuesday night to discuss various issues including peace and order and developing the south.

He said that based on their talks, he feels that Duterte is feeling the burden that the next generation needs a real leader.

Cayetano announced Tuesday his plan to run for vice-president in the 2016 election.

He said he and his entire family are adding their voices to the clamor for Duterte to run for president in 2016.

He noted that he and Duterte share the same core values, being both a supporter of federalism and ”real change.”

Duterte, who ranked fourth in the latest Social Weather Stations (SWS) and Pulse Asia surveys, behind Senator Grace Poe, former Interior Secretary Mar Roxas, and Vice President Jejomar Binay, remains undecided whether he will run or not for president.

After ”categorically” ruling out a bid for president, Duterte said over the weekend that he needs more time to do some ”soul-searching.” He later clarified that his statement was taken out of context.

In the interview, Cayetano confirmed he will not be the running mate of Liberal Party standard bearer Mar Roxas due to differences of opinion on some issues.

Cayetano said he had talks earlier with President Aquino and other LP members on the possibility of running as the party’s vice-presidential candidate.

Cayetano earlier admitted that his own family and supporters felt more comfortable that he run as an independent “or with someone they are passionate about.”

He also noted that he and Aquino have cleared the air, amid reports that the President does not want him to become Roxas’ running mate following their supposed tiff in 2010 where the senator supposedly called Aquino’s mental stability into question.

”Na-clear up na namin ng pangulo. I never called him names directly,” Cayetano said, adding that the president was able to prove his detractors wrong with his work in the last five years.

Meanwhile, Cayetano said the race for the VP post will become more challenging after other Nacionalista Party members also announced their plans for 2016.

Cayetano is bound to run against fellow NP member Senator Antonio Trillanes IV. Senator Ferdinand “Bongbong” Marcos Jr., also an NP leader, is himself considering a possible run for either the presidency or vice presidency.

Trillanes will run as an independent. Marcos has been eyed by the camp of Vice President Jejomar Binay of the United Nationalist Alliance (UNA) as a running mate though the senator remains non-committal.

Aspirin and your heart health

Get involved! Become a mission partner, benefactor or donor for poverty alleviation foundation