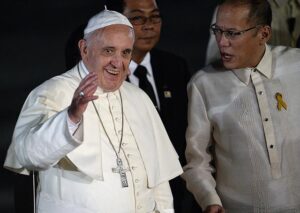 Pope Francis waves at the crowd shortly after arriving at Villamor Air Base on Thursday, January 15, while President Benigno Aquino III looks on. Pope Francis is the Philippines for a five-day state and apostolic visit that will be highlighted by a meeting with survivors of super typhoon Yolanda in Leyte on Saturday, January 17. (MNS photo)

MANILA (Mabuhay) – A Catholic Bishops’ Conference of the Philippines official over the weekend called President Benigno Aquino III a liar for claiming before Pope Francis last week that the Catholic Church was silent about the abuses under his predecessor Gloria Arroyo.

Biking priest Fr. Amado Picardal said it was offensive for Aquino to make such a claim before the leader of the world’s Catholic Church.

“He bore false witness against the Church in front of Pope Francis, the whole nation and the whole world. He was not only rude, he was also a liar. This is what made his welcome address very offensive,” he said in a post on the CBCP news site.

Picardal is the executive secretary of the CBCP committee on Basic Ecclesial Communities.

“His welcome address to the Pope in Malacañang was pathetic and a monumental embarrassment to the nation. He was not just rude, he also did not speak the truth. That was un-presidential of him. This was the lowest, ugliest moment of the papal visit,” the priest added.

Picardal was referring to Aquino’s opening remarks to the pope at Malacañan Palace last Jan. 16, when the pope called on him.

Aquino at the time scored some members of the Church for being silent in the face of abuses under the Arroyo administration.

Picardal particularly questioned Aquino’s statement where he said “many members of the Church, once advocates for the poor, the marginalized, and the helpless, suddenly became silent in the face of the previous administration’s abuses, which we are still trying to rectify to this very day.”

The priest noted Aquino had also scored some members of the clergy for criticizing him even about his hair.

But he said the Church was not silent under Arroyo, citing his personal example where he held a 56-day, 4,750-kilometer bike tour for peace and brought a letter of concern to Arroyo in Malacañang in 2008.

He said his letter to Mrs. Arroyo scored her and her government for perpetuating a “culture of death and corruption and for being a hypocrite,” where she “goes to Mass every day and claims that it is God’s will that she is president.”

“There may have been some members of the clergy, religious and faithful who were silent. But there were also many who spoke out against the abuses of the previous administration. The facts speak for themselves,” Picardal said.

Even priests and religious also did so, with the Association of Major Religious Superiors of the Philippines (AMRSP) providing support and sanctuary to engineer Rodolfo Noel “Jun” Lozada Jr., who exposed the details of the NBN-ZTE scandal.

“Sure, some of his political enemies are already in prison for corruption, but what about his friends and allies. He continues to defend his PNP chief who has been charged with corruption. Pope Francis’ comment about corruption in government was in reference to the present administration,” he said.

He also scored Aquino for supposedly defending “patronage politics” and the corrupt pork barrel system, until the Priority Development Assistance Fund was declared partially unconstitutional by the Supreme Court.

Picardal also said that while Aquino’s administration is hammering a peace deal with the Moro Islamic Liberation Front, “it has not shown any interest in continuing the peace process with the National Democratic Front.”

Also, he said the Aquino administration has not adequately responded to the disasters caused by successive typhoons and other calamities.

He said Aquino even snubbed the anniversary of super Typhoon Yolanda in Tacloban.

Picardal said he supported Aquino’s candidacy in 2010 because he thought at the time that Aquino “was a decent man who continued the legacy of his parents whom I admire so much.”

“I was mistaken. To my regret, he has turned out to be a big disappointment in the end. I wonder if his parents would be proud of him. With all his good intentions, he was not up to the challenge of becoming a great leader like his parents,” he said. (MNS)

Nurses Can Immigrate without a Job Offer