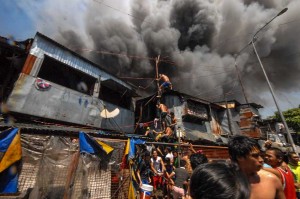 Residents use a thin pole to climb to the rooftops of their houses so they can battle the fire in Parola compound in Tondo, Manila. Two fires in succession hit the area occupied by thousands of shanties, rendering almost 10,000 families homeless and living in temporary shelters. (MNS Photo)

MANILA (Mabuhay) – Parishes can do their part to help prevent fires by disseminating fire prevention tips in the communities, a Catholic Bishops’ Conference of the Philippines official said Wednesday.

CBCP public affairs committee executive secretary Fr. Jerome Secillano said this as he appealed to parishes to beef up their information and awareness campaigns related to Fire Prevention Month.

Data from the Bureau Fire Protection showed 615 fires had been recorded in January and February in Metro Manila alone.

At least 18 people had been killed and 46 were injured.

In several cases, an electrical short circuit was tagged as the cause of the fires.

Earlier this week, a fire destroyed several houses at the Parola Compound in Tondo, Manila.(MNS)