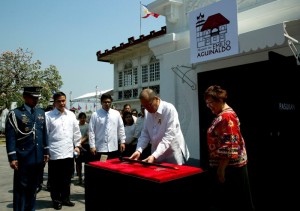 President Benigno S. Aquino III lays the replica of “vara de mando” (cane of command, which is the symbol of authority of General Emilio Aguinaldo as “capitan municipal” or “gobernadorcillo” of Cavite El Viejo (old name of Kawit) in a special casing to signal the formal inauguration of the Museo ni Emilio Aguinaldo at the Emilio Aguinaldo Shrine in Kawit, Cavite on Friday (March 20). The museum chronicles the life and times of Aguinaldo, especially during the revolution against Spain and war against the United States. Also in photo are National Historical Commission of the Philippines chairperson Dr. Maria Serena Diokno and Transportation and Communications Secretary Joseph Abaya. (MNS photo)

MANILA (Mabuhay) –It’s also a sign of a great man to be sorry when remiss.

On this note, Cebu Archbishop Jose Palma on Wednesday advised President Benigno Aquino III: There is nothing wrong in apologizing for the Jan. 25 Mamasapano clash that killed 44 Special Action Force troopers.

“Para sa akin, it’s also a sign of a great man to be sorry if we feel we are remiss … so I leave that to him. Para sa akin, wala dapat ikahiya if you have done something wrong,” he said.

Aquino has so far declined to apologize for the Mamasapano bloodbath, even as the deaths of the 44 SAF troopers have drawn national sympathy.

Palma said Aquino should apologize after a Philippine National Police Board of Inquiry found that the President may have bypassed the PNP chain of command.

A Senate panel investigating the incident also said Aquino was ultimately responsible for the “massacre.”

It said Aquino was accountable after he allowed the then suspended Philippine National Police chief Director-General Alan Purisima to be involved in overseeing Oplan Exodus in the morning of Jan. 25.

Meanwhile, Palma also said the probe by the House of Representatives should push through so the public may know what happened in the Jan. 25 incident. (MNS)