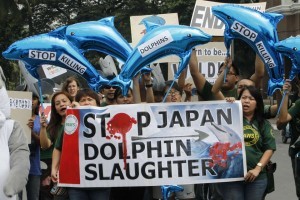 Activists hold dolphin-shaped balloons and banners urging the Japanese government to end dolphin killings, during a protest in front of the Japanese embassy in Manila September 2, 2013. The protest is part of a global movement by animal welfare groups to spread awareness about the slaughter of dolphins and whales, an Earth Island Institute Philippines press statement said. (MNS photo)

MANILA  (Mabuhay) — The number of fatalities in last month’s collision between a passenger ship and a cargo vessel in Cebu went up further to 108 as of Monday noon, the Philippine Coast Guard said.

In its noon update, the Coast Guard said this left at least 29 more passengers of MV Saint Thomas Aquinas 1 missing.

According to the Coast Guard, 733 had so far been rescued while the remains of 108 fatalities were recovered, and 29 more are missing.

The accident resulted in an oil spill that affected Cordova town, and prompted the Cebu provincial government to declare a state of calamity over the entire province.

The E-2 Visa – The entrepreneur’s option