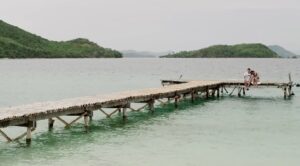 “Waves” is a romantic drama about the intimate love affair between Ross (Baron Geisler) and Sofia (Polish model Ilona Struzik) – two troubled souls who decide to rekindle an abandoned friendship.

Waves stars multi-award winning actor, Baron Geisler (Ross), Polish model Ilona Struzik (Sofia) and award winning actress and beauty queen, Pilar Pilapil (Cora). It is a romantic drama about the intimate love affair between Ross and Sofia – two troubled souls who decide to rekindle an abandoned friendship. A jaunt to an isolated island brings back old emotional struggles and sheds light to new ones, making any kind of relationship an unlikely proposition.

“Baron Geisler is a really good Filipino actor. He typically portrays antagonist roles in crime dramas and action movies in the Philippines. With his subtle intensity, I thought he’d do well in a romantic role.

Ilona Struzik is a professional model that has worked in several countries. She’s a natural fit for the role. Pilar Pilapil represented the Philippines in 1967 for Miss Universe. It seemed appropriate for her to portray a role as sort of a mother figure to Ilona’s character,” said director Don Gerardo Frasco when asked about how he chose the actors.

Frasco, whose roots hail from Cebu studied in the New York Film Academy. And by living abroad, he was able to meet most of his collaborators in the film. Thus, a multi-ethnic cast and crew was formed for this project. He commissioned Scott Curtis Graham to do the screenplay. Ukranian producer Anna Skrypa handled the production between Philippines and the US, and Ayana Jimenez from Cebu is the associate producer and also handles the business development and marketing of Waverly Productions. Post-production was handled by Adrian Morales Ramos, and camera and lighting were handled by Yousheng Tang and Deanna Covello.

In “Waves,” the location also plays an essential role in setting the mood and emotion of the entire movie. At times, it even becomes sort of a “character” by itself.  The film brings its viewers to the beautifully intimate beaches of the Philippine archipelago, where Ross (Geisler) and Sofia (Struzik) dive in to their emotional adventures. Though most scenes depict dark and jarring emotions brought on by the main characters, the location also evokes a sense of emotion. The calmness and stillness of the deep blue oceans of Cebu and the pristine white beaches of Mangenguey Island in Coron, Palawan represent the struggles that the two main characters experience. “We imagined the beautiful, yet isolated seascapes of Palawan could serve as a good backdrop to a relationship that’s falling apart,”said Frasco. The movie also showcases different cities of Cebu such as Liloan, Consolacion, Oslob Pangdait and Cebu city.

Waves will be released theatrically in the Philippines in June, where it is currently distributed through VIVA Films. For international viewing, the film is available online on VIMEO ON DEMAND. Simply log on to https://vimeo.com/ondemand/wavesfilm to purchase or rent a copy.

What’s next for Iza Calzado