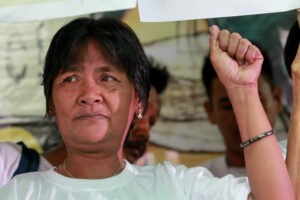 Celia Veloso, mother of Mary Jane Veloso, raises her fist before answering questions at a briefing at the Migrante headquarters on Friday. She blames the Philippine government for her daughter’s conviction and death sentence for trafficking illegal drugs in Indonesia. (MNS photo)

MANILA (Mabuhay) — Celia Veloso, mother of Mary Jane Veloso, the Filipino death row inmate in Indonesia, attended Mass in Quezon City on Wednesday where she emotionally reiterated her appeal for understanding from netizens, who criticized her for her anti-government rant last week.

Netizens blasted Celia for her strongly-worded tirades against the government despite its efforts — highlighted by a brief meeting between President Benigno Aquino III and Indonesian President Joko Widodo in Malaysia — to save Mary Jane from the firing squad.

Celia said it was not easy for a mother to watch her innocent daughter languish in a foreign jail. She said at that time, she could not stop worrying about Mary Jane.

It was the same appeal made by Celia at a rally in Cabanatuan City in their home province of Nueva Ecija the previous day.

Mary Jane, 30, was arrested at the Yogyakarta Airport in April 2010 after authorities found 2.6 kilograms of heroin sewn inside her bag.

Although she said she was tricked by her Filipino recruiter into bringing the bag to Indonesia, Mary Jane was still sentenced to die by firing squad by the Indonesian court.

Upon their arrival from Indonesia last week, Celia blasted the government and denied it played a role in convincing the Indonesian government to temporarily stop Mary Jane’s execution.

Mary Jane’s execution for drug smuggling was put on hold on the last minute following widespread appeals, including from Aquino, who discussed her case in a brief meeting with Widodo in Malaysia.

Despite Aquino’s gesture, Celia still furiously blamed the government for her daughter’s ordeal.

Celia, despite her appeal to the public, still insisted that the government mishandled Mary Jane’s case, noting the many times she went to the Department of Foreign Affairs (DFA) office in Pasay City when she first heard of Mary Jane’s arrest.

She said at one time, a lawyer from the DFA told her that Mary Jane’s death sentence was a lost cause.

Meanwhile, Celia said she is glad that Mary Jane’s recruiter, Maria Christina Sergio, has already been arrested and is now facing charges.

According to Celia, it was Sergio who told them not to talk about Mary Jane’s case to the media.

Aside from Celia, other members of the Veloso family, as well as their lawyers, also attended the Mass, the “Balitanghali” report said.

Members of eight church organizations that are helping the Veloso family, including Mary Jane, were also in attendance, the report added.

The Veloso family and their lawyers are set to meet with Justice Secretary Leila de Lima on May 8 to discuss the case against Sergio.

Mary Jane’s testimony against her recruiter was cited as reason for the reprieve granted to her by the Indonesian government. (MNS)