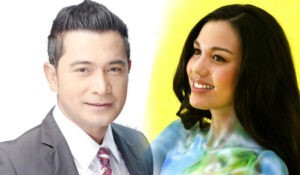 Amid speculation about their relationship, actor Cesar Montano and beauty queen Sandra Seifert were spotted together during a recent episode of “The Ellen DeGeneres Show.”

A showbiz website published photos of the two in the studio audience of the popular American talk show, as seen in its May 26 telecast.

Rumored for months now to be romantically involved, Montano and Seifert would not confirm or deny whether they are a couple. They also did not have a direct answer when asked whether Seifert, as rumored, is pregnant with the actor’s child.

Seifert, who won the Miss Philippines-Earth title in 2009, is allegedly under the care of Montano’s older sister in Italy, as they supposedly expect her to give birth.

Montano, 52, and Seifert, 31, were also reported to have watched together the May 2 bout of Manny Pacquiao and Floyd Mayweather, Jr. in Las Vegas.

However, the two have been evasive in answering directly how they are involved. This, amid Montano’s legal feud with his estranged wife, actress Sunshine Cruz. They separated in 2013.

Cruz has filed a complaint against Montano, with whom he has three daughters, for supposedly violating Republic Act 9262 or the Anti-Violence Against Women and their Children Act. (MNS)

Ana Roces back in ABS-CBN

Coleen opens up on past with Gab Valenciano