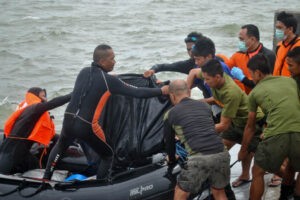 MANILA (Mabuhay) – The Ormoc City Police have filed charges against the owner and captain of the ill-fated M/B Kim Nirvana.

Supt. Ferdinand Garay, chief of the Ormoc City Police, on Saturday said they have filed multiple murder charges against M/B Kim Nirvana’s owner, Joge Bung Zarco, and captain, Warren Oliverio, in connection with the ferry’s sinking in the waters off Ormoc City.

The motorized, wooden-hulled boat was just several hundred meters away from the port of Ormoc City and was bound for Camotes island when it capsized last Thursday.

The Philippine Coast Guard (PCG) said it is looking at the possibility that overloading or human error may have caused the boat to capsize.

Zarco, however, maintained that the vessel was not overloaded with passengers or cargo.

Based on the manifest, 173 passengers were on board the boat, which could carry up to 178 passengers. But Capt. Pedro Tinampay, commander of the PCG Eastern Visayas District, said the boat was carrying at least 199 passengers and crew.

Oliverio, meanwhile, claimed the boat capsized due to strong waves. He said he was making a turn when a large wave hit the vessel.

As of 7 a.m. Saturday, 59 bodies have been recovered, according to Tinampay. There were 140 survivors, he said.

The PCG official said they will check if there are bodies still trapped inside the ship, which has already been brought to the surface. “Hopefully [wala na],” he said. (MNS)

Keep Gnats From Becoming A Pain in the Neck

Break Into Business With a Franchise