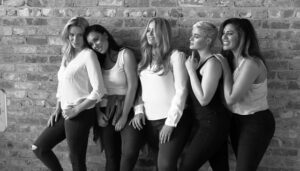 (Relaxnews) – Models might look perfect on the outside, but a new video series is showing us that they can suffer from the same body insecurities as the rest of us.

#ProjectWomanKIND (PWK) is a new web series campaign which sees five curvy Australian models –Jessica Vander Leahy, Olivia Langdon, Sophie Sheppard, Stefania Ferrario and Margaret Macpherson – talking about hang-ups they have regarding their looks, and how they deal with them.

The series aims to tackle “narrow definitions” of beauty and expose the honest conversations that women have with themselves every day. The project’s YouTube channel explains: “We are out to motivate women to recognize that they are more than just what they see in the mirror and remind them that the sisterhood is real. PWK believes that … giving women a platform to speak candidly on all body image issues can only result in an openness to further accept the unique qualities that make up each of us and the sooner we accept that, the better off we will be.”

Each of the models stars in her own video, talking frankly about how they viewed their bodies growing up, and how they deal with the pressures of working in an industry that places such an emphasis on perfection.

“I’ve definitely had times when I’ve been on a set and a pair of pants haven’t fit and it’s been all my fault,” explains Sophie Sheppard, who has appeared in Vogue Italia. “I used to get really upset about it and I guess still do if that sort of thing is going to happen – it’s not a nice feeling. But I think when I was younger, when I first started out, I was so much more self-conscious about everything.”

The project’s founder and director, Sydney-based model Jessica Vander Leahy, talks about the ups and downs of body image, saying: “You kind of look at yourself and go, ‘Argh, how did anyone ever kiss this face?’ and then you just get over it, get on with it and another good day comes.”

The project has garnered international attention on social media after resonating with women everywhere. After all, as Olivia Langdon, signed to Milk Management, tells the camera: “Your sense of self-worth is not relevant nor proportional to your shape or your size, or of anyone else’s.”