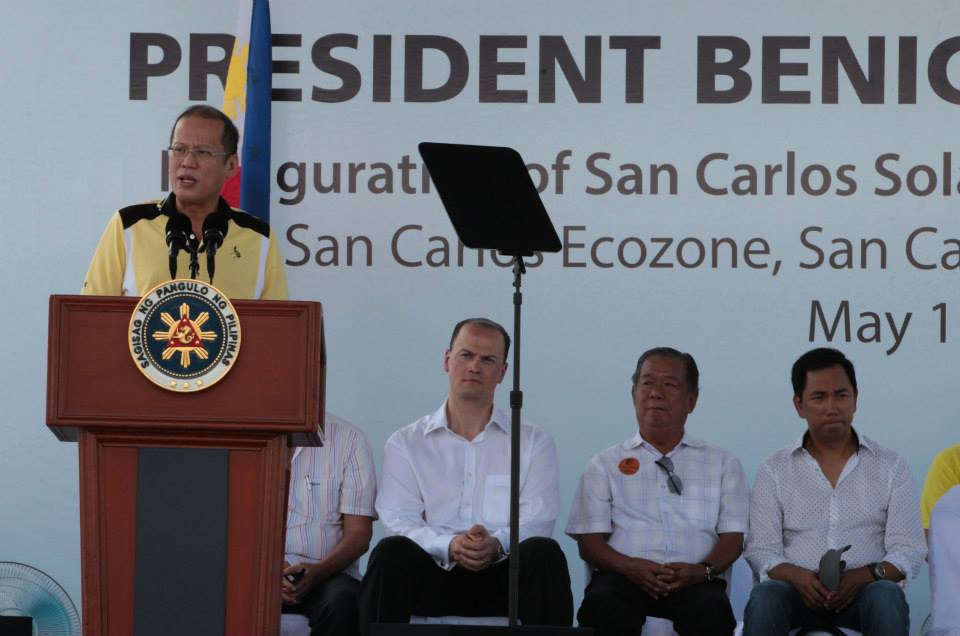 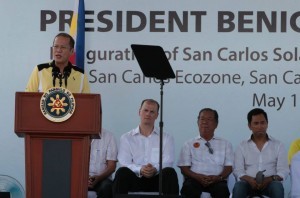 President Benigno S. Aquino III delivers his speech during the Inauguration of San Carlos Solar Energy, Inc. (SACASOL) Phase I at the San Carlos Ecozone in San Carlos City, Negros Occidental on Thursday (May 15, 2014). The SACASOL project is a greenfield, stand alone solar farm that would supply daytime base load power to the local grid throughout the entire year. It is expected to have a total gross capacity of 22 MW to be developed in two phases: Phase 1 with 13 MW and Phase 2 with 9 MW. The solar farm will provide supplemental electricity to an area of short supply and increasing demand for power. Its goal is to harness sustainable power from our planet’s largest source of energy, the sun. The Project is committed to maintaining the environmental integrity of the surrounding area. Also in photo are ThomasLloyd Group chairman T.U. Michael Sieg, Negros Occidental Governor Alfredo Marañon, Jr. and Energy Secretary Carlos Jericho Petilla. (MNS photo)

MANILA (AFP) – Philippine President Benigno Aquino on Monday accused China of violating the “Declaration of Conduct” it signed in 2002, after it allegedly began reclaiming land on a disputed reef in the South China Sea.

Manila last week publicly accused Beijing of large-scale reclamation activity at Johnson South Reef, which is also claimed by the Philippines. Filipino officials fear this could lead to China building its first airstrip in the disputed region.

“In my view… what they are doing now, this is all seemingly in violation of what we agreed in the Declaration on the Conduct of Parties in the South China Sea,” he told reporters.

He stressed that China, along with members of the Association of Southeast Asian Nations (ASEAN) signed the declaration in 2002 in a bid to ease tensions over the South China Sea, but this agreement was not binding.

Aquino said the statement effectively called on all parties to refrain from building new structures in the disputed area until the conflict is settled.

China claims almost all of the resource-rich waters, parts of which are also claimed by ASEAN members, the Philippines, Brunei, Malaysia and Vietnam and non-member Taiwan.

Aquino said the problem was that the Declaration was non-binding, adding that the incident showed the need for a binding “Code of Conduct that would stop these actions that have a potential of causing violence and unrest”.

The dispute over the reef, which the Chinese navy seized from Vietnam in a deadly 1988 skirmish, is among a tangle of maritime rows in the sea involving the Asian superpower and its smaller and weaker neighbors.

The Philippines had asked a United Nations tribunal in March to declare what Manila said was China’s claim to 70 percent of the sea as illegal.

The Philippines also filed a separate diplomatic protest against China’s reclamation works on Johnson South Reef last month, but Beijing also rejected it on grounds the reef is part of Chinese territory.

In another area of the sea, China moved an oil rig into waters claimed by Hanoi, sparking a clash between Chinese and Vietnamese vessels earlier this month.

The dispute has triggered the worst anti-Chinese rioting in Vietnam in decades, targeting Chinese and other foreign-owned factories.