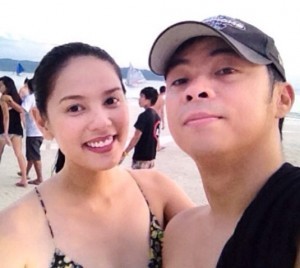 But on Christmas Day, Miranda surprised his Instagram followers when he posted a photo of the two of them with the caption “Merry Christmas from Mr. & Mrs. Miranda.”

It wasn’t clear when the wedding happened as Miranda did not provide any details.

Their supporters, nonetheless, were thrilled with the news.

Earlier Wednesday, Miranda said they are off to Dubai, where Parokya ni Edgar will have a special concert with the Eraserheads.

During the launch of his band’s latest album early this month, Miranda said he is already planning his future with Naig.

“Ako ever since planado ko na ‘yon talaga,” Miranda was quoted as saying. “Siyempre when you are in a relationship, you always want to think na this would be it. So yeah there’s a plan.”

Miranda also said he and Naig have moved on from their sex video scandal, which broke last August. The veteran rocker had claimed that a thief had ransacked his room and managed to steal a hard drive that contained the private video, among other files. (MNS)