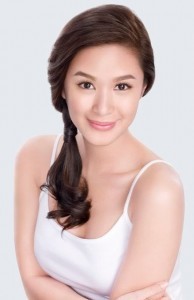 Actress Heart Evangelista is hinting that she might get married this year to boyfriend, Senator Francis “Chiz” Escudero.

Evangelista was asked if 2014 would be her last year as a single woman.

Evangelista, who will celebrate her birthday on February 14, said she will spend her special day abroad with Escudero.

Escudero and Evangelista had their first date in May 2012 and officially became a couple on July 31 that year.

Their relationship has been haunted by several intrigues – her parents have been very vocal about their disapproval of Escudero, whom they accused as disrespectful and a heavy drinker, but the couple stood by their relationship.

For Escudero, the key to their strong relationship is being open to each other.

“Wala kaming itinago sa isa’t isa. Open, bukas and what you see is what you get, walang false pretenses, maganda ang simula,” the senator said. (MNS)

Megan looks back at showbiz