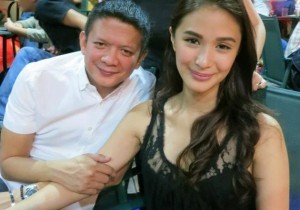 MANILA, Mar 21 (Mabuhay) – Senator Francis “Chiz” Escudero admitted he was hurt by the accusations thrown against him by the parents of his girlfriend Heart Evangelista.9

In a press conference held in Naga on Thursday, Escudero professed his love for Evangelista, describing the ordeal they are currently going through as “matindi at masakit.”

As a parent, Escudero said he is trying hard to understand where Evangelista’s parents are coming from.

Escudero, who is seeking a re-election in the May polls, said he is hoping that people would just stop meddling in the issue.

He did not take any questions from the media.

Evangelista’s parents, Cecile and Rey Ongpauco, held a press conference on Tuesday to formally appeal to both their daughter and Escudero to reconsider their relationship.

The Ongpauco couple cited several reasons for their objection to the relationship, including Escudero’s alleged “fondness” for alcohol, his being 16 years older than Evangelista, and the possibility that the senator and their youngest daughter may not marry as Catholics.

Both Rey and Cecile Ongpauco emphasized their disdain for Escudero’s being an alleged “alcoholic,” saying it is among the reasons behind the growing tension within their family.

Evangelista, meanwhile, reiterated her feelings for the lawmaker. She also apologized to her boyfriend and to members of his family who may have been affected by the Ongpauco couple’s allegations.

Evangelista also said she hopes that her parents will respect her decision to be in a relationship with Escudero, who has expressed confidence that he and the actress will overcome the controversy.

Dingdong Dantes set for a busy 2014