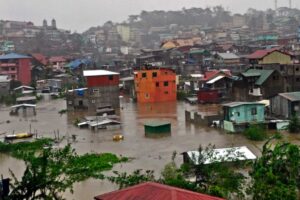 Several houses are submerged at the City Camp Lagoon in Baguio City on Monday after intense rains spawned by Typhoon Lando. More than 200 families were evacuated from the area, a perennial catch-basin for floodwaters in the summer capital during torrential rains. (MNS Photo)

Escudero, who chairs the Senate Committee on Environment and Natural Resources, lamented that many LGUs remained unaware that they could have access to P1 billion in special fund to boost their long-term mitigation and adaptation programs on climate change.

“You cannot just go from storm to storm, flood to flood. Climate change is behind these frequent and extreme weather events; LGUs should be more proactive in addressing the problems at the root, instead of being merely reactionary,” he said.

The PSF is a special fund created by virtue of Republic Act 10124 or An Act Establishing the People’s Survival Fund to Provide Long-Term Finance Streams to Enable the Government to Effectively Address the Problem of Climate Change.

Escudero, former chair of the Senate finance committee, pointed out that the government is mandated to earmark at least P1 billion for the PSF annually; any portion of the fund that is unused will not revert to the national treasury.

“Why is that money still there? What is the point of having this special fund if nobody uses it? Meanwhile, our local governments contend with the impacts of climate change year-round –from prolonged droughts to heavy floods,” Escudero said.

“It’s been three years since we passed the law – has the PSF even been useful to anybody? What is stopping the government from releasing the money?” he asked.

Unlike in last year’s National Expenditure Program (NEP) when there was no such stipulation, the 2016 NEP provides that the P1 billion allocated as PSF “may likewise be used to cover any deficiency in the implementation of the National Disaster Risk Reduction and Management Program, and Yolanda Rehabilitation and Reconstruction Program, subject to the approval of the President of the Philippines.”

The PSF may finance local adaptation initiatives such as water resources and land management; risk insurance for farmers, agricultural workers and other stakeholders; infrastructure development and protection of natural ecosystems; monitoring of vector-borne diseases triggered by climate change; forecasting and early warning systems; contingency planning for droughts and floods; establishing and strengthening information networks to support adaptation initiatives;; and other community support programs by organizations accredited by the Climate Change Commission.

Escudero, the leading vice presidential candidate, urged LGUs to submit climate mitigation and adaptation proposals to the Climate Change Commission, which serves as the secretariat of the PSF Board. The commission will then create a shortlist from which the PSF Board will choose the funding recipients.

The PSF board is composed of the Department of Finance, Climate Change Commission, National Economic Development Authority, the Philippine Commission on Women, Department of the Interior and Local Government, and representatives from non-government organizations, business, and the academic and scientific community.