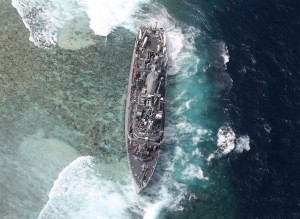 BROKEN COMPASS?: Stuck after running aground the Tubbataha Reef in the Philippines is this USN Navy ship USS Guardian. The Philippines demands that the U.S. pays them P58 million in cash.
(MNS Photo)

MANILA, Apr 24 (Mabuhay) – The government should not accept a suggestion that the United States government provide aid to cover for the P58 million in damages to the Tubbataha Reef, re-electionist Senator Francis “Chiz” Escudero said.

He said the U.S. should pay in cash, not in kind.

“I insist that the U.S. government pay up in cash, the suggestion that they would settle their obligations through donations or aid loans are not acceptable. They should follow what the Philippine law required for the incident,” he said.

“Even if the return from the offer to pay in kind would be bigger than the actual fine, it remains unacceptable since what is provided in the law should be followed,” Escudero said.

He noted that the P58 million is already an “inequitably small fine.” He said it would not help if the government waived this too.

He said he is now planning to increase the penalty on the damage to the country’s protected sources if he gets another chance in Congress.

The Tubbataha Reefs Natural Park Act of 2009 provides that a fine of about $300 or P12,000 per square meter is mandatory, plus another $300 or so per square meter for rehabilitation efforts.

Escudero said it is not about the amount that the country will get. He said it’s about the issue of respect between two allies.

“I don’t buy the alibi given by the US Navy that the compass of the vessel failed to function and it lost its way when it rammed the reef, even Christopher Columbus used only a compass in discovering the New World. How can a modern American war vessel be sailing aimlessly?” Escudero asked. (MNS)