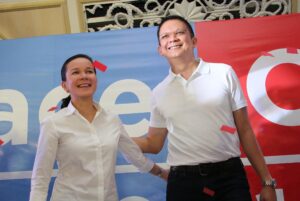 Fellow Senators Grace Poe Llamanzares and Francisco Escudero recently declared their intent to run for president and vice president, respectively. Escudero, in his announcement, stressed that ideal contenders for public office should only be beholden to the Filipino people.

MANILA (Mabuhay) — Senator Francis ‘Chiz’ Escudero vowed to place a greater role for the state in breathing life to the country’s manufacturing sector should he and his running mate, presidential candidate Senator Grace Poe, be elected to power.

Speaking at a news forum on Tuesday, Escudero said creating a robust manufacturing sector is key to inclusive growth and global competitiveness, which were key items in his and Poe’s platform.

He said government can step in by allowing businessmen easier access to credit and itself investing in certain industries such as steel-making, which takes billions of dollars to set up and is too heavy for the private sector to shoulder on its own.

“I think government should actively participate in this particular field, especially with the amount of money needed to start a manufacturing company,” Escudero said.

In 2014, manufacturing accounted for 27 percent percent of the Philippine economy, a far second to the services sector, which makes up almost half of gross domestic product.

Escudero said among the changes he would want to see in the Philippines is the creation of “government-led, made-in-the-Philippines industries.”

Escudero admitted that the country lags behind its neighbors in terms of manufacturing, which was a key driver in the economic success of countries like China, Japan, and South Korea.

He said the cost of electricity in the Philippines, which is among the highest in Asia, is a concern that must be addressed by exempting indigenous sources of energy from taxes.

But Escudero also said the Philippines has advantages over its neighbors when it comes to manufacturing.

“We are slowly but surely becoming more competitive at least insofar as wages and industrial peace,” he said.

Aside from manufacturing, Escudero said he and Poe will focus on improving the country’s agriculture sector through better infrastructure, and pouring enough funds for having additional years in the basic education system through the K to 12 program.(MNS)

Colina Back To Back Belo in Norwalk on Sept 30