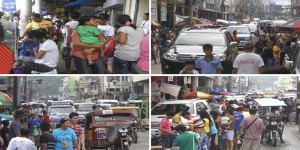 People in Tacloban City swarm the public market area on a sunny Thursday (December 26, 2013) after their Christmas celebration, including kids’ caroling activities and visit to godparents and relatives, was spoiled by continuous rains on Christmas Day. (MNS photo)

TACLOBAN  (Mabuhay) — Survivors of the country’s deadliest typhoon spent a gloomy Christmas Day surrounded by mud Wednesday as heavy rain drove many inside their flimsy shelters, dampening efforts to retain some holiday cheer in the deeply devout nation.

Groups of children in plastic raincoats braved the incessant rain in the devastated central city of Tacloban, knocking on doors in trick-or-treat fashion and beseeching pedestrians for candies, coins and other Christmas presents.

But housewife Susan Scala sat glumly under a white tarpaulin in one of Tacloban’s many tent cities that have sprung up for those made homeless by Super Typhoon Haiyan (local name: Yolanda). At a time when her family should be celebrating, all she could think about was her missing husband.

“Even if it’s not Christmas I don’t stop thinking about him,” the mother of five said of her husband Oscar, a telephone utility worker believed lost at sea when giant waves whipped up by the November 8 storm swept away homes in the city’s San Jose slum.

Like many of the city’s typhoon survivors, the miserable weather made Scala nervous. “This incessant rain is scary. It reminds me of what happened (during the typhoon),” the 53-year-old said.

Haiyan left more than 6,100 people dead and nearly 2,000 others missing, many of them from Tacloban and nearby towns, in the storm-prone country’s deadliest typhoon disaster.

About 4.4 million others were left homeless across the central islands and now live in tents provided by aid agencies or rough shacks fashioned by survivors from the wreckage of destroyed homes and fallen trees.

In the city’s ruined Sagkahan fish port, 67-year-old widow Emiliana Aranza pulled sweets and short bread from jars at her makeshift store in front of her shanty to give to the children who knocked on her counter.

“It’s a sad Christmas Day. We have lost our home and the government will not allow us to rebuild here, as it’s too close to the shore,” she said.

But she said sharing what is left of her possessions had an uplifting effect.

“There are still a lot of reasons that we should be thankful to God,” she said, including the fact that her two adult children and their 13 sons and daughters, who now have to live together in the cramped shanty, survived the disaster.

“Because of the typhoon, members of my family are now tightly knit. Gone are the petty quarrels,” she added.

Scala said her family ate a traditional midnight meal on Christmas Eve in keeping with traditions in the largely Catholic nation, but had to make do with tinned sardines and steamed rice, part of the weekly aid rations from the government and humanitarian agencies.

For breakfast on Christmas Day, she said her family ate the previous night’s leftovers and would have to make do with instant noodles for lunch.

She does not have any idea where she will get the money to build a new house or whether she will be able to send her two school-age children back to school.

Downtown, bespectacled mother Maria Meneses, 31, dived into a pile of garbage outside a department store along with half a dozen or so other residents left impoverished by Haiyan.

“This is for my daughter,” she said, showing a salvaged pack of two tiny candy-coloured cake candles that she had spirited into her pink handbag.

“I was waiting for the store to open to buy batteries for my daughter’s walkie-talkie toy and told myself, ‘Why not, some of those items thrown in among the trash are still in good condition’.”(MNS)

Pre-Wedding Beauty Tips for the Bride