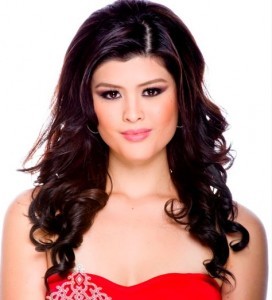 The daughter of Christopher de Leon and Sandy Andolong is planning to establish her own name in show business.

Mariel, who was a finalist in Binibining Pilipinas 2013, said she is currently undergoing workshops in ABS-CBN to better equip herself in this venture.

While she still plans to join beauty pageants in the future, Mariel said she would like to give showbiz a try.

“Actually when I was in Bb. Pilipinas last year, I knew na I really wasn’t ready because I was still 19. That’s pretty young. I just wanted to try it muna, like dip the toes in the water. Of course when I didn’t win anything, I was sad of course. Pero I realized na later on, good thing I didn’t win. Because I did, I knew I wasn’t ready so I wouldn’t bring home anything. Better to not win,” she said.

The 20-year-old beauty said she is fortunate because her parents got her back in whatever she wants to pursue.

“They let me do whatever I want and they support me in everything so basically it’s my choice. I would still want to [join beauty pageants] pero not anytime soon kasi I don’t feel ready yet. I have to work pa,” she said.

Asked if her parents give her acting tips, she said, “They’re not stage parents so they don’t really give me any advice now that I’m starting because they want me to start from the bottom without shortcuts.”

As to what genre of acting she likes to try, Mariel said, “Drama, I think it’s easier to cry than to make people laugh.” (MNS)