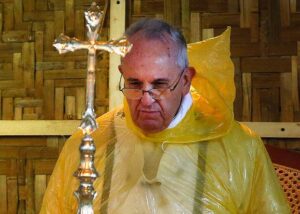 Pope Francis, in a rain poncho, officiates a Mass in Tacloban Airport upon his arrival on Saturday, January 17. Rain greeted the Pope when he arrived in the city to console the survivors of super typhoon Yolanda, the country’s worst natural disaster that killed several thousands more than a year ago. (MNS photo)

During the Catholic Bishops Conference of the Philippines’ closed-door general assembly of archbishops, Church officials agreed that in order to end poverty, corruption must be fought, said Manila Archbishop Luis Antonio Cardinal Tagle.

Pope Francis, on his flight back to Vatican City, told the journalists on board that corruption has plagued daily life and even the Church.

“We have to ask forgiveness for Catholics and Christians who scandalize the Church with their corruption. It is a plague,” he said, adding that while committing corruption is “easy,” it should never be done.

“Corruption is to take away from the people. A person who does corruption, governs in a corrupt way, or associates himself with people who do corruption – robs the people,” he said.

During his courtesy call on President Benigno Aquino III in Malacañang on Friday, the second day of his visit, Pope Francis challenged politicians to “reject every form of corruption,” which he said “diverts resources from the poor.”

“Reforming the social structures which perpetuate poverty and the exclusion of the poor first requires a conversion of mind and heart,” he said.

On Monday, after sending off the Pope, Aquino said the government is already working on Pope Francis’ call against corruption and poverty even before the papal visit.(MNS)

Relax: Itâ€™s Good For You