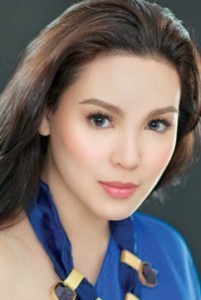 She may have left the cudgels of ABS-CBN, but actress Claudine Barretto said her heart will always belong to the networkâ€™s talent management arm that saw her mature both as a person and an actress.

In a taped video message aired on â€œASAP 2012â€ on Sunday, Barretto gave credit to Star Magic, which managed her when she was still with ABS-CBN.

â€œStar Magic saw me grow up on kiddie TV, as a teenybopper, as a young adult in â€˜Buttercup,â€™ saw me swim as a mermaid sa â€˜Marina,â€™ and saw me cry buckets of tears sa lahat ng mga teleserye ko. My seat might have left your door, but my heartâ€™s forever and will always be with you,â€ she said.

Barretto said â€œthere are some things in life that cannot and should not be erased,â€ and her experience with Star Magic is one of them.

â€œThank you so much Star Magic for all of this. I will forever be grateful. May your magic continue. Happy 20th anniversary Star Magic. I love you,â€ she said.

Barretto left ABS-CBN to move to a rival network in 2009.

Despite her departure, she still figured a rift with Star Magic chairman emeritus Johnny Manahan in 2010, after she accused Angelica Panganiban, a Star Magic talent, of spreading rumors that she was having an affair.

Star Magic head Mariole Alberto recently revealed that Barretto tried to reach out when she called Manahan on his birthday last February 11, but Manahan refused to speak to her.

When asked if Barretto had tried to return to ABS-CBN, Alberto â€œwaved the question away,â€ the magazine said.

Rhian gets back on track

Marjorie teases Julia: Enrique is prettier than you

Regine: ‘Angeline is the next superstar’

‘Ikaw Lamang’ made me a better actress, says Julia