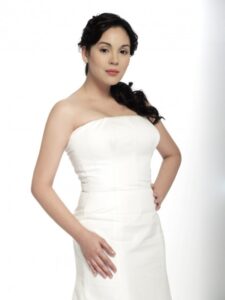 Long-time ABS-CBN viewers may remember watching, 10 years ago, a fresh-faced Claudine Barretto transforming into a mermaid (and at one point, a fairy) in the pioneering fantaserye “Marina.”

Directed by Wenn Deramas and Andoy Ranay, it centered on the titular mermaid on her quest for true love’s kiss, in the hope of permanently overturning a curse and becoming human again.

“Marina” was only one of the many top-rating collaborations between Barretto and Deramas, who, to the delight of their fans, teased on Friday their first project together in eight years.

On their respective Instagram pages, the two shared the same photo of them together.

Barretto referred to Deramas as her “mentor,” while the director, in his photo’s caption, enumerated the past series they worked on, such as “Mula sa Puso,” “Saan Ka Man Naroroon,” “Sa Dulo ng Walang Hanggan” and “Walang Kapalit.”

The director did not specify whether “Pinilit Kong Limutin Ka,” which is also the title of a 1992 song by Ariel Rivera, is a film or a TV series, although Barretto has been teasing for some time a movie project supposedly to be co-produced by Star Cinema and Viva Films.

“Pinilit Kong Limutin Ka” will mark Barretto’s acting comeback after a string of legal feuds that beset her in the past two years, notably with her estranged husband Raymart Santiago and her sister, actress Gretchen Barretto.

The “Milan” star also recently made headlines when she expressed support for young actress Julia Barretto, one of the children of another estranged sister, Marjorie. (MNS)