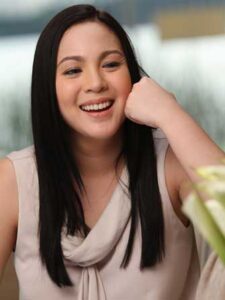 After six years, Claudine Barretto has finally returned to ABS-CBN.

The 35-year-old actress was formally introduced as one of the lead stars of Star Cinema’s “Etiquette for Mistresses,” along with Kris Aquino, Kim Chiu, Iza Calzado and Cheena.

The movie based on the Julie Yap Daza book will not only mark Barretto’s Kapamilya comeback, but also her return to acting after a three-year hiatus.

Recent years saw Barretto involved in an airport scuffle, a legal feud with estranged husband Raymart Santiago, and a publicized spat with her siblings Gretchen and Marjorie.

For the former Star Magic artist, “Etiquette for Mistresses” is a chance to get her career on track again after being sidelined by controversies.

Despite apprehensions about her comeback, Barretto finds comfort in the company of Aquino and the film’s director Chito Rono, both of whom she collaborated with on the 2006 horror blockbuster “Sukob.”

“First love ko ang acting. To be back now with this big, big project – and aside from this, may iba pang malalaking projects – knowing that is overwhelming and I am overjoyed.