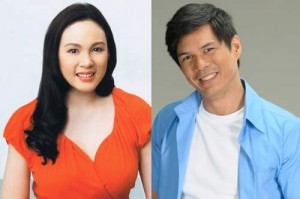 MANILA (Mabuhay) — “Today, I am breaking my silence.”

This was the pronouncement of actress Claudine Barretto in making known a “vicious cycle” of abuse from her husband, actor Raymart Santiago, which allegedly dates back to 2002, four years before they were married.

The 40-year-old Santiago now faces a case for his alleged violation of the Anti-Violence against Women and Their Children (VAWC) Act of 2004.

Barretto was accompanied by her legal team, her parents, as well as fan groups dubbed “Claudinians” and “Claudinatics,” in formalizing the complaint on Thursday afternoon.

The actress joined her supporters in wearing purple shirts imprinted with “Stop Violence Against Women and Children – Gabriela” on the front side, and “Justice for Claudine Barretto” on the back.

As Barretto emerged from the Marikina RTC, the actress was met with hugs from her long-time fans, who voiced out their support by exclaiming, “Mahal na mahal ka namin, pinagdarasal ka namin!”

She went on to gather them as they made their way to a press briefing, where she tearfully recalled the “years of abuse” she allegedly experienced in Santiago’s hands.

Reading a prepared statement, Barretto said her “life with [Santiago] was a vicious cycle of violence, abuse, battery and exploitation.”

“During the years I have been with him, I have been in constant fearful state of mind, because I was repeatedly abused and controlled over a period of time.

“Now, it’s time, with all my horrendous experiences in the hands of my husband… Today, I am breaking my silence. I have decided to stop and end the abuse and violence and make my husband criminally and civilly liable for all his actions,” she said.

She continued: “Abuse transcends all economic, educational and social borders. Even I, a celebrity who almost has everything, was still physically, sexually, psychologically and economically abused by my own husband.”

“I took the big step of stopping and ending the abuses of my husband by filing a criminal complaint against him,” Barretto said, referring to the VAWC case she filed with the support of women’s rights group Gabriela.

Gabriela’s legal counsel, Atty. Junelet Mataro, who is handling Barretto’s case, said the abuse started in 2002. Refusing to give details about the alleged instances of abuse, the lawyer said Barretto complained of such acts which happened between 2005 and 2013.

“She has been experiencing so many abuses since they were married,” Mataro said.

Santiago and Barretto were married in March 2006. They have two children — an adopted daughter, Sabina, 9; and a biological son, Santino, 6.

Referring to her client’s complaint-affidavit, Mataro said, “We have pictures, medial certificates to prove the physical violence inflicted upon her by Raymart. We also have pictures of the wounds of Claudine.”

The complaint, according to Mataro, can also prove the “economic abuse” allegedly committed by Santiago, citing bank statements.

“We also have affidavits from the members of her family for the psychological abuse, because Claudine has said she has been socially alienated by Raymart,” she said.

Mataro explained that the accusation of “pyschological abuse” stems from Santiago’s “web of lies” about his relationship with Barretto, which supposedly earned him the support of the actress’ family members.

“He socially crippled Claudine of the support of her family and friends, but as you can see, the members of her family are here. They are supporting Claudine, and they have realized that they were fooled by Raymart into believing some of the things that he has been mentioning about Claudine,” the lawyer said.

As for the “sexual abuse” detailed in Barretto’s complaint, Mataro said the actress had expressed apprehensions about her supposed lack of evidence in proving there was any instance of such act.

But the lawyer noted, addressing in general female victims of sexual abuse, “Hindi naman kailangan ng pictures regarding abuse. Your testimony is good enough. Even if your husband doesn’t believe, the court will definitely believe you if you are telling the truth.”

Noting the alleged extent of abuse Santiago is being accused of, and the supposed duration of some 10 years, Barretto was asked why she only chose to come out with the “truth” now.

Barretto explained she had initial hesitations about formalizing the complaint in the interest of protecting her children, and even Santiago.

The actress’ first move that signaled her marital woes was her filing a petition for a temporary protection order (TPO) in July against Santiago, which she is now seeking to make permanent.

Both parties are also seeking the full custody of their children.

Crying at this point, Barretto admitted seeing a psychologist to deal with her personal problems — a matter earlier hinted at by her estranged siblings Joaquin and Gretchen at the height of their publicized family feud early this year.

As Barretto sobbed in between speaking, her father, Miguel, was seen gently tapping her shoulder as if to urge her to put down the microphone.

Not a ‘career move’

Asked for her message to her detractors, Barretto stressed she is not out to convince others to believe her.

Amid news of her pending showbiz comeback with two film supposedly in the pipeline, Barretto maintained her legal battle is not a form of publicity for her career.

Responding to Barretto’s accusations on Thursday, Santiago said he is not surprised with the actress’ legal move. The actor, who has repeatedly denied abusing his wife, expressed confidence that the truth will eventually come out.

After 10 years together, Jason Abalos and Vickie Rushton are married