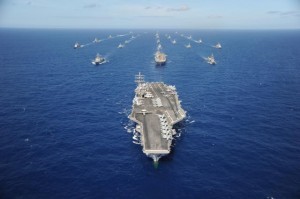 Miami, United States, AFP – Climate change may lead to disturbances in marine life that will take thousands of years to recover from, not hundreds of years as previously thought, researchers said Monday.

The study in the Proceedings of the National Academy of Sciences is based on a section of fossilized ocean fauna found on the seafloor off the coast of California dating to between 3,400 and 16,100 years ago.

Researchers sliced up the sediment like a cake for a before and after glimpse of how creatures were affected by climate change during the last major deglaciation, when polar ice caps melted abruptly and low oxygen zones expanded in the ocean.

Ice melt and ocean dead zones are an increasing concern today, as scientists study the warming planet and trends that are driven by the burning of fossil fuels that send greenhouse gases into the atmosphere.

Researchers analyzed more than 5,400 invertebrate fossils, such as sea urchins and clams, and found that they “nearly disappeared from the record during those times of low oxygen,” according to the study.

Levels of oxygen in the ocean dropped by between 0.5 and 1.5 milliliters per liter over a period of less than 100 years, a relatively minor changes that resulted in “dramatic changes and reorganizations for seafloor communities,” the study said.

Climate change in the future could have similar effects, and could take a similar time scale for ocean life to rebound, on the order of thousands, not hundreds of years, the researchers said.

“There’s not a recovery we have to look forward to in my lifetime or my grandchildren’s lifetime,” said lead author Sarah Moffitt, a scientist from the Bodega Marine Laboratory and Coastal and Marine Sciences Institute at the University of California, Davis.

‘Hasaan Ng Tulaan’: A Night Of Philippine Culture And Poetry

A journey back to life