Coast Guard: 6,483 stranded due to Amang 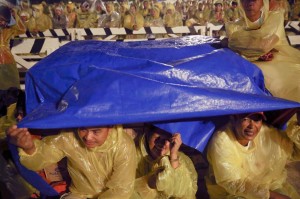 Pilgrims brave rain and strong wind as they wait at Tacloban airport for Pope Francis to arrive on Saturday. About two million people are expected to attend an open-air mass in Leyte, which is still struggling to recover from Super Typhoon Yolanda that killed more than 6,000 people in 2013. (MNS photo)

In its 8 a.m. update, the Coast Guard also said 32 vessels, eight motor bancas and 451 rolling cargos at port were stranded as well.

The Coast Guard said a breakdown of those stranded included: