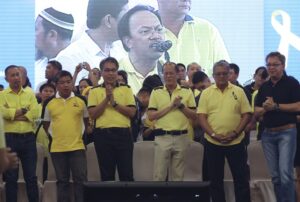 MANILA (Mabuhay) — Malacañang on Friday welcomed the recent Pulse Asia survey placing former Interior Secretary Manuel “Mar” Roxas at the third spot with 18 percent, up by eight points from his rating in June.

“Sec. Roxas posted the most significant increase of eight points which indicates increasing support for him as the standard bearer of Daang Matuwid,” Communications Secretary Herminio Coloma Jr. said in a text message.

Senator Grace Poe, still the front runner in the latest presidential preference survey with 27 percentage points, said in her declaration speech that “Daang Matuwid” is not exclusive to one man or group.

Coloma also credited Roxas’ increase in the survey to President Benigno Aquino III’s endorsement of his presidential candidacy in July.

“This improvement was achieved within a month after President Aquino endorsed his candidacy,” he noted.

The survey was commissioned for ABS-CBN and was conducted nationwide from August 27 to September 3 from 1,200 respondents with a margin of error of plus-minus three points.

Vice President Jejomar Binay of the opposition United Nationalist Alliance maintained his spot at second place with 21 percent, one point lower than his rating in June. (MNS)