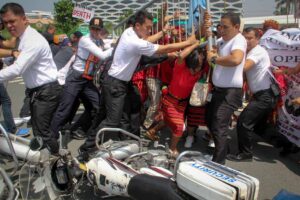 Security guards block around 200 anti-mining protesters, mostly indigenous people, during a rally against the International Mining Conference at the Solaire Resort and Casino in Paranaque on Tuesday. The groups oppose the militarization and the effects on the environment allegedly brought by mining operations. (MNS photo)

MANILA (Mabuhay) – The Commission on Elections (Comelec) has received “intelligence reports” that China may attempt to sabotage the Philippine elections in 2016, one of its ranking officials told lawmakers Wednesday.

During the Comelec’s briefing for election preparations before the House committee on suffrage and electoral reforms, Comelec Commissioner Christian Robert Lim said this is the reason why they transferred the location of the factory that will manufacture the voting machines that will be used in the 2016 elections from China to Taiwan.

“We want to emphasize that the move to Taiwan was a product of the contract negotiations because we have received intelligence reports that there may be an attempt to sabotage the elections by China,” Lim said.

Lim added the poll body en banc has made the transfer of the factory producing the Precinct Count Optical Scan (PCOS) machines “non-negotiable” for Smartmatic-TIM because they are concerned that the ongoing arbitration case between China and the Philippines may have an impact in the country’s national elections.

“The commission made it non-negotiable that the provider would have to transfer the facilities to Taiwan at their expense,” he said.

Beijing and Manila have been locked in a long-standing territorial dispute over portions of the South China Sea, which is considered an important shipping lane and believed to contain rich gas and oil deposits. (MNS)

LP stalwarts say Mar Roxas should stay in the Cabinet