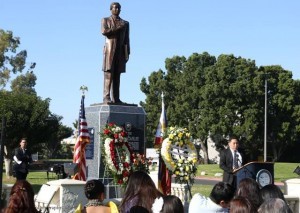 Los Angeles – The City of Carson in cooperation with Dr. Jose S. Rizal Monument Movement (JPRMM) commemorated the 117th Martyrdom of Dr. Jose S. Rizal with a wreath laying ceremony on 29 December 2013 at the International Sculpture Garden, City of Carson, California. The Philippine Consulate General in Los Angeles, led by Consul Marlowe Miranda, and the City Council of Carson, led by Mayor Jim Dear and Mayor Pro Tem Elito Santarina, laid their respective wreaths at the foot of the Rizal Monument.

The event was participated in by leaders of the various Filipino-American associations in Southern California. The program included invocation by Ms. Naomi Armada, Founder and Executive Director of the Philippine Heritage Institute International (PHII) and welcome remarks by JPRMM Chairman Mr. Chito Mandap. Officials of the City of Carson, Mayor Jim Dear and Mayor Pro Tem Santarina, delivered brief messages recognizing the event the mainstreaming of Filipino culture in America.  Mr. Santarina also read the complete text of City Resolution 13-121 which was recently passed by the Carson City Council, declaring 30 December of every year as Rizal Day in that city.

The Rizal Monument, with the statue standing at 8 feet on top of a 7-foot granite pedestal, was unveiled in September 2012 and is the first monument to be installed in the International Sculpture Garden of Carson.