First, the good news: The City of Anaheim, place of choice of more than 346, 000 residents, one of the most populous cities in California and home to the world famous Disneyland Resort, has been named  as “2014 Playful City in the U.S.A because of its commitment to providing places and opportunities for children’s year-round balance and active play”.

The sad news, and a real dampener which many find Anaheimers hard to believe, is that their beloved city has been ranked 9th in the list  “Unfriendliest Cities in the U.S.” according to a survey of Conde Naste Traveler Reader notwithstanding its 20 million tourists who visit the world class offerings and the reported record-breaking high hotel occupancies.

Asian Achiever: Orange County’s Asian-Pacific Islanders achievers in various fields were recognized for their contributions to the community at the awards ceremonies highlighting the celebration of the Asian Pacific Islanders Heritage Month at the South Coast Plaza Shopping Mall recently. The event was organized by Pacific Trade and Culture Alliance in cooperation with their business and professional organizations in the county and had become a showcase for the colorful and artistic heritage of Asian culture.

The city elders, led by Mayor Tom Tait, brushed off the label with the honor heaped on the City as a “Playful City” which recognized its effort to“strive to continue to create and maintain a vibrant park system consisting of well-maintained parks which provide safe, challenging recreational opportunities that feature playgrounds with exciting play opportunities”.

Anaheim joined 212 other communities and towns across the United States recognized by KaBoom! And the Humana Foundation for emphasizing  the importance of outdoor recreation that “energize children and stimulate their minds, as well as offer physical challenges that encourage fitness to be part of their daily lives”.

The honor is Anaheim’s first designation as a 2014 Playful City USA and the 23rd city in California to receive the distinction and only the second in Orange County.

KaBOOM! Helped the City of Anaheim in renovating and added amenities to at least five parks in its jurisdiction that included those at  the Edison, Stoddard, Schweitzer, Modjeska and John Marshall.

Playful City USA is a national recognition program of Humana Foundation which honors cities and towns “that champion efforts to make play a priority by establishing policy initiatives, infrastructure investments and innovative programming”. The program recognizes communities that demonstrate a commitment “to ensure that all kids get the balance of active play they need to thrive”. 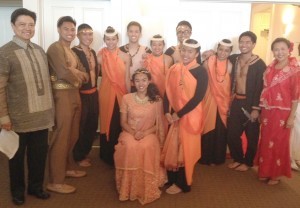 Philippine Culture: Members of the UCLA Dance Troupe take a breather after their performance at the 116th Philippine Independence Day celebration of the Los Angeles County Filipino American Employees Association (LACFAEA) with Dr. Ramon Geluz, (at extreme left), whose master pieces, “Karim at Jasmin” and the “Life and Loves of Dr. Jose Rizal” the cultural group had the honor of presenting at the annual celebration.

The Conde Naste Traveler also listed Newark, New Jersey, as the meanest of the “mean cities” with Los Angeles occupying the sixth place.

On another note, off the “Friendliest Cities” Charleston took the top and Sonoma joined the company. It is the only California city that made the top 10 on the list occupying the No. 9 spot and has been  billed as a “down-to-earth alternative to Napa.”

Readers commented on Los Angeles, Anaheim, Oakland and Sacramento as “not nice” with Angelenos giving visitors “the cold shoulder”.

Travelers also labeled the California cities on the list as “dirty, dangerous and dingy” with a respondent describing Los Angeles as “too busy and too many cars” with Anaheim being labeled as”dirty,” “rough” and “a dangerous place for Mickey Mouse to hang out.”

Of the 46,476 readers who took Conde Nast Traveler Readers’ Choice Survey online poll last year, 2,400 mentioned Anaheim with 42.5 percent ranking it as “excellent” or “very good” on a five-point scale of friendliness.

The unfriendly attribute also flew in the face of Mayor Tom Tait’s proclamation to engage in a “Year of Kindness,” which extends to tourists and does not believe is reflective of the city he knows as a “very friendly”.  The City is always looking forward to improve.

Arrest order vs Arroyo, 9 others out

Help Your Kids Re-focus on School