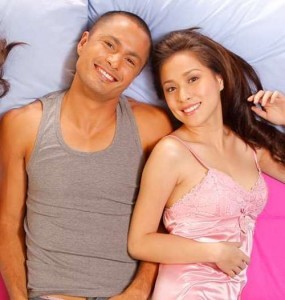 MANILA  (Mabuhay) – — After years of “going out as friends,” Cristine Reyes and Derek Ramsay became a couple on August 28.

The 36-year-old actor confirmed the news, as quoted in a report published Thursday on entertainment news site Yahoo! OMG. Ramsay said he and Reyes agreed to admit the relationship if asked.

On micro-blogging site Twitter, Ramsay readily addressed a comment from a follower noting he earlier said he would no longer date a showbiz personality after his controversial break-up with former girlfriend, actress Angelica Panganiban.

“I did say that I’ll never date someone from showbiz and that I’d never date Cristine [because] she is a friend. I eat my words,” he said.

Reyes, however, was less forward in addressing similar questions when she spoke with reporters at the sidelines of a press conference held Wednesday for the upcoming ABS-CBN series “Bukas Na Lang Kita Mamahalin.”

At the time they co-starred as a married couple in the romance-drama film “No Other Woman” in 2011, Reyes and Ramsay were still with their respective former partners.

Reyes and actor-dancer Rayver Cruz in January made a televised announcement of their separation, which took place last year. Ramsay and Panganiban, on the other hand, broke up in February 2012, according to the actress.

Since Reyes’ separation from Cruz, who is one of her co-stars in “Bukas Na Lang Kita Mamahalin,” the actress and Ramsay have been romantically linked.

While the two admitted frequently going out and being “in constant communication,” they maintained they were only friends.

The two are currently gearing up for their second big-screen project together, “Trophy Wife,” under the production of Viva Films. (MNS)

A vibrant change for Sarah