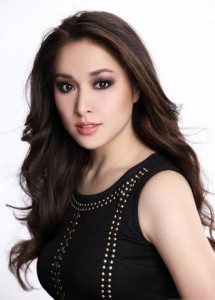 CRISTINE Reyes said that she and a foreign guy are dating exclusively.

Although she is still hesitant to reveal the identity of her suitor, Cristine said he is different from the men she dated in the past.

“Siguro kasi he’s out of the business, so nakikita ko na sa kanya, ‘Ah, this is life pala,” she added.

The 25-year-old actress revealed that she is contemplating on her future family life and said that she could not ask for more when it comes to her showbiz career.

Meanwhile, former sweethearts Reyes and Derek Ramsay are back together on the big screen via Viva Films’ romantic drama flick “Trophy Wife”.

The actress said there were awkward moments while filming the intimate scenes of the movie but they eventually made it work.

The two became a couple in middle of last year but they both decided to call it quits after dating for a month. Despite the breakup Ramsay and Reyes remain as friends.

Iya gets ‘private tutor’ in Pilipino