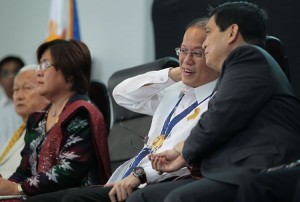 -- President Benigno S. Aquino III converses with NBI Director Atty. Magtanggol Gatdula during the 75th Anniversary celebration of the National Bureau of Investigation (NBI) at the NBI Gymnasium along Taft Avenue in Ermita, Manila on Wednesday (November 23). The NBI was founded on November 13, 1936 upon approval of the Commonwealth Act. No. 181 by the legislature. It was the brainchild of the late President Manuel Quezon and Jose Yulo, then Secretary of Justice. In photo are DOJ Secretary Leila de Lima and Manila City Mayor Alfredo Lim. (MNS photo)

MANILA, Nov 23 (Mabuhay) â€“ The Aquino administration is too focused on going after former President Gloria Macapagal-Arroyo that it forgot about the Philippine economy, Zambales Rep. Mitos Magsaysay said Wednesday.
â€œIf thereâ€™s anybody who hasnâ€™t moved on, itâ€™s theÂ  administration. Theyâ€™re so obsessed with (GMA), they forgot we have pressing problems,â€ she said.
Magsaysay said there are many issues that President Aquino forgot to focus on including the high cost of power, gasoline, commodities , rising levels of unemployment, absence of infrastructure projects, low economic growth, and â€œdistinctionsâ€ such as having the worst airport and being the worst country for business. She said President Aquino should apply the same zeal in pursuing Arroyo to the problem of managing the economy.
For his part, Quezon Rep. Danilo Suarez said he doubts if Filipinos will have a Merry Christmas this year. â€œAre we going to have a Merry Christmas and Happy New Year? Weâ€™re being downgraded byÂ  the World Bank next year,â€ he said.
Suarez said the government delayed spending to next year to help them with the 2013 elections. â€œPinagpalit kapakanan ng taumbayan para sa partido,â€ he said.
He said not a single infrastructure project has been approved under the public-private partnership (PPP) scheme. He claimed the country is perceived to have gotten worse in terms of corruption.
House Minority Leader Edcel Lagman, who delivered a privilege speech the other night on Arroyoâ€™s arrest, said the interpellations â€œwere a waste but not my privilege speech.â€
Lagman said the administration is taking advantage of the perception that Arroyo is unpopular so â€œthey can do anything, embarrassing and curtailing her rights and the people will not act and thatâ€™s a very myopic view of our people.â€
â€œThe propensity of this arbitrary and despotic agenda feeds on two perceptions: (1) the former President is unpopular so much so that the bastardization of her rights will not incense the people and may even get popular approval; and (2) the uniformed forces â€“ the military and the police â€“ are supportive of the administration.â€œ
Lagman stressed that once the President violates the law, the security forces are obligated not to follow him.
Defiance of SC
Magsaysay said it is not a waste of time to talk about the violation of rights and defiance of the Supreme Court.
â€œThe Executive branch is not following the order of the Supreme Court.Â  How can you say thereâ€™s waste of time? Everybody has the right to deliver a speech in Congress. If we respect privilege speeches being made by the majority, ganun po dapat trato natin dito,â€ she said.
Lagman added: â€œWe can move on but we should not be curtailed in discussing before the plenary basic constitutional rights which are being disregarded.â€
â€œJustice delayed is justice denied. Justice with alacrity waylays the rule of law and thatâ€™s whatâ€™s happening now.â€
Lagman also explained why Arroyo did not file a counteraffidavit, which became the basis for the finding of probable cause against her.
â€œUnang-una, the prosecution should not depend on the weakness of the defense but theÂ  strength of the prosecution. What I like to underscore is she did not file an affidavit because she was questioningÂ  the legitimacy of the joint panel. That has to be resolved first.
â€œIf resolved against the petitioner, the petitioner should be given the right to adduce a counteraffidavit that should set back process. Di tama agad agad nagfile pinagmadali. There was admission ni-rush yan.â€
Lagman pointed out that the judge, while he had 10 days to determine probable cause on his own, managed to assessÂ  8 volumes of documents and evidence in just 4 hours and determine probable cause.
â€œJudge should not blindly follow certification of the prosecutor. He has to determine personally. That is why heâ€™s given 10 days to resolve to issue warrant or not. Dito 4 hours lang,â€ he said.Â  (MNS)