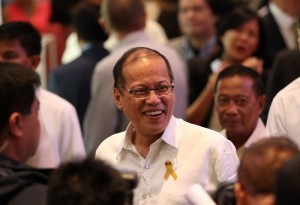 President Benigno S. Aquino III graces the “History and her Story” – A Special Commemorative Photo Exhibit on the 5th Death Anniversary of former President Corazon C. Aquino at the Glorietta Activity Center in Palm Drive, Makati City on Monday (August 04, 2014). The exhibit gives its readers a rare glimpse into Mrs. Aquino’s life – from her school years at the St. Scholastica’s College, to her marriage to the late Senator Benigno Aquino, Jr., to the People Power revolution that changed her life, and in the process, Philippine history. It also revisits Mrs. Aquino’s years as the first female President of the Philippines from 1987 to 1992. (MNS photo)

MANILA (Mabuhay) – President Benigno Aquino III’s hint that he may be open to seeking a second term has stirred a hornet’s nest in the House of Representatives, with allies backing the notion and critics saying he had “unmasked” his true intentions.

The suggestions for Aquino to seek a second term come as the House is about to start plenary debates on a resolution authored by Speaker Feliciano Belmonte Jr. to amend the economic provisions of the Constitution.

“As I said before, the President cannot just let the process of transformation and progress be wasted as the remnants of the traditional, corrupt leaders are salivating on the prospect of returning to their old ways,” Caloocan Representative Edgar Erice said.

Erice, a member of Aquino’s Liberal Party, said he was consulting with various groups on the possibility of filing a bill to amend the Constitution to lift the presidential term limit.

The 1987 Constitution allows a president a single six-year term.

Last night, the President said he was now open to amending the Constitution, a notion he had always rejected in the past, saying there was a need to clip the powers of the Supreme Court.

Asked about a possible second term should the Charter change allow it, Aquino said he would listen to his “bosses,” the people, although he qualified that this did not automatically mean he would heed their clamor for another term.

“His performance is impeccable, and we need to sustain the momentum of economic growth to ensure that the greater majority benefit from it,” Evardone said. “Six years is too short for a good president. President Aquino, no doubt, is a good president with unquestionable integrity and capability.”

Evardone was once a staunch ally of Aquino’s predecessor, now Pampanga Representative Gloria Macapagal-Arroyo, who is facing graft and plunder charges for the alleged corruption that marked her nine years as president.

Ifugao Representative Teddy Baguilat said he would favor a second term for Aquino “if the Constitution allowed it.”

“But let’s hear it from the people, and I hope he gets to really feel the pulse of the people, not just politicians,” Baguilat, also an LP stalwart, said. “His good legacy is intact. History will be kinder to him.”

Isabela Representative Rodito Albano, a member of the minority bloc, called Aquino’s statement about a second term a “game changer.”

The constituent assembly, composed of both chambers of Congress, is one of the ways by which the Constitution can be amended.

But Aquino’s critics in the House vowed to oppose any attempts to grant him a second term.

“This exposes the scheme of term extension and amendment of the Constitution for personal motives,” Bayan Muna party-list Representative Neri Colmenares said.

He also criticized Aquino for seeking to clip the powers of the Supreme Court.

“He wants to go back to the time of Marcos when the castrated Supreme Court is powerless in the (face) of presidential abuse,” Colmenares said.

In a separate statement, Kabataan Representative Terry Ridon accused Aquino of seeking “to extend his term and unlock enormous powers for the executive branch.

“The truth is finally revealed. President Aquino wants to wield the notorious Infinity Stone that is Charter change to defeat his perceived archenemy, the Supreme Court, extend his term, and broaden the scope of his executive powers,” Ridon said.

He called Aquino “delusional” for thinking that “he was the sole guardian” of the country, adding that calls for his reelection were all coming “from his own backyard.”

ACT party-list Representative Antonio Tinio said Aquino’s statement was reminiscent of Arroyo’s announcement that she would run for a second term after she had earlier vowed to serve for only the remainder of the term of deposed President Joseph Estrada.

“Aquino proves how grand delusions of righteousness can foster dictatorial tendencies. After usurping congressional power of the purse through his Disbursement Acceleration Program, he now wants to clip the powers of the Supreme Court that called him out for doing so. Who knew that “daang matuwid” could turn out to be a shortcut to tyranny? He may be an Aquino but he’s nothing more than a Marcos wannabe,” Tinio said.

“If only he learned the right lessons from his mother. Cory Aquino famously led a million-people march to oppose the Charter change campaign of then-President Fidel Ramos. PNoy will learn for himself that presidents who seek to extend their stay in office will be relegated by the people to the trash bin of history,” Tinio added.   (MNS)

Can’t Get The Web Address You Really Want?

Alert up for flood-related diseases in affected areas