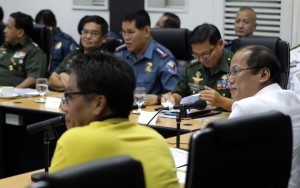 MANILA (Mabuhay) – The European Union (EU) is financing some P570 million worth of projects for reforms in the field of Philippine justice and rule of law.

The event was also attended by ambassadors from Czech Republic, Italy, Netherlands, Spain, United Kingdom, Belgium, France and Germany, as well as consuls from Bulgaria, Estonia, Finland, Lithuania and Slovakia.

To be implemented over the next four years, and with DILG as the lead agency, the projects will focus on access to justice of the poor and disadvantaged people, addressing impunity in major crimes, in particular extra-legal killings and enforced disappearances.

The project will primarily provide training on crime scene examinations, forensic skills, and investigation techniques as well as assistance to design and implement new operating procedures.

It will also include acquisition of investigative aids and kits to boost scene of the crime operations.

Roxas explained that many convictions in the country can be attributed to witnesses but not to physical evidence.

Also included in the project is acquisition of more efficient case management systems and affordable information technology to ensure an easier and faster disposition of cases.

Based on the study of EU, 2010 figures show that it takes an average of more than five years for a case of extra- judicial killing to make its way through prosecution and adjudication without counting investigation.

“This compounds the perennial problem of case congestion affecting the courts which up to now have to continuously deal with a backlog of well over 600,000 pending criminal and civil cases,” Ledoux said.

Roxas, meanwhile, said they are now in the process of changing the system of hiring new policemen.

He explained that the qualified applicants will now be drafted, not by any police officer, but through a lottery system using a tambiolo.

Roxas emphasized that this is just one of the many reforms they are undertaking especially after a recent transparency international survey showed that the Philippine National Police (PNP) is perceived to be the most corrupt institution in the country. (MNS)

Some Pinoys affected by ‘Sandy’: Cuisia