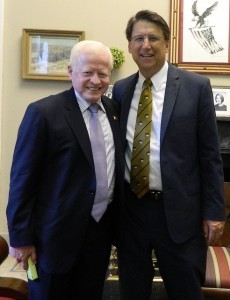 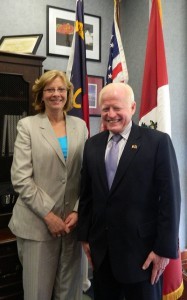 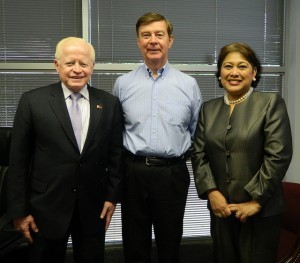 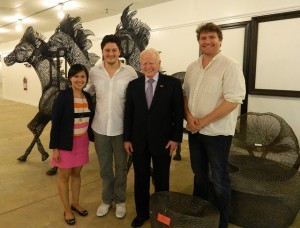 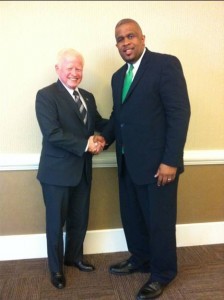 Ambassador Jose L. Cuisia Jr. meets with the Filipino-American Community of the Carolinas, Inc (FACC) in Charlotte, North Carolina to share the exciting reform story of the Philippines.

WASHINGTON, D.C.—The Philippines continues to take advantage of its new status as an emerging tiger with by intensifying its economic diplomacy blitz in the United States to promote greater trade and investment.

The focus of the latest economic diplomacy efforts were the states of North Carolina and Virginia, which were visited by Ambassador Jose L. Cuisia only a few weeks after the successful holding of the 2nd Philippine Investment Roadshow in California, Illinois and Massachusetts.

“This is a good time to enhance our trade relations, given the renewed optimism and confidence in the Philippines under President Benigno S. Aquino III’s administration,” Ambassador Cuisia said. “Whether in terms of our macroeconomic indicators or competitiveness rankings, the Philippine economy is at an all-time high in many respects. The reason is simple: we believe that good governance is good economics.”

In his meetings with officials and business leaders in North Carolina and Virginia, Ambassador Cuisia made sure he was able to put the Philippines on their radar screen, in terms of its strategic location in Southeast Asia, its proven competitive advantage, the significant  talent and skills of the Filipino workforce, as well as priority being given by the government in various sectors such as information technology and business process outsourcing, agribusiness, mining, tourism, housing, shipbuilding and energy.

“I see tremendous market opportunities for Philippine exports particularly of food, garments and furniture and interest in  investments in electronics manufacturing and biotechnology, and clinical research outsourcing ,” the Ambassador said, as he also flagged the potentials for public-private partnership in infrastructure development specifically in energy and transport sectors.

In North Carolina, Ambassador Cuisia called on Governor Pat McCrory and Mayor Nancy McFarlane in the state capital, Raleigh. He also visited the North Carolina Biotechnology Center as well as companies in Raleigh and High Point such as Phillips Collection, RF Micro Devices Inc., and Arbovax to encourage them to expand their operations in the Philippines. Ambassador Cuisia also met with Councilman David Howard of Charlotte, home to energy and power companies like Duke Energy, which ranks No. 2 in banking and financial services in the United States.

In Virginia, the Ambassador met with State Delegate Ron Villanueva and officials of Virginia Beach Economic Development Department and Port of Virginia Authority; Virginia Beach Councilman Glenn Davis, Chief Executive Officer of On Call Holdings International; and the Navy Exchange Service Command. He also visited the newly opened branch of Jollibee in Virginia Beach, the Filipino fastfood chain’s 28th store in the US.

“I hope that as a result of our visits, we can work on a platform to bring North Carolina and Virginia and Philippine businesses closer,” Ambassador Cuisia said. “We should explore complementarities and seize mutual opportunities in our economies.”

The economic missions to the two states followed the visits to Los Angeles, Chicago and Boston of a top-notch business delegation from Manila led by prominent economist Bernardo Villegas that participated in the 2nd Philippines Investment Roadshow.

As a result of the strong interest expressed on the Philippines by American government and corporate executives, Ambassador Cuisia, said plans are underway for the 3rd Philippine Investment Roadshow in Houston, Atlanta and Philadelphia sometime between April and May next year. ###

PHL wraps up a successful participation at DEMA Show 2014