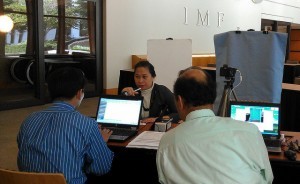 OAV REGISTRATION
The Philippine Embassy in Washington D.C. has intensified its efforts to get as many Filipinos as possible to register as overseas absentee voters in preparation for next year’s elections in the Philippines. The Embassy sent a consular team to register Filipino staff at the International Monetary Fund (IMF) headquarters and urged others to beat the deadline for registration on 31 October. Photo shows Gilda Ordonez Baric, an officer of the World Bank-IMF Filipino Association, going through the registration process. (Philippine Embassy Photo by Arlene Magno)

WASHINGTON, D.C.—With less than three weeks to go before the deadline for the registration of overseas absentee voters, the Philippine Embassy and Consulates General in the United States are working double time to get as many qualified Filipinos as possible to participate in next year’s elections in the Philippines.

In a statement, Ambassador Jose L. Cuisia, Jr. said that a total of 35,400 Filipinos across the US have registered to be overseas absentee voters as of 12 October 2012. This brings to 84,459 the total number of overseas absentee voters in the US and its trust territories of Guam and Commonwealth of the Northern Marianas who can now vote for national elective positions in the Philippines.With 20 days remaining until the end of the current registration period, Ambassador Cuisia reiterated the appeal of Foreign Affairs Secretary Albert F. del Rosario to the Filipino Community for its invaluable support in making next year’s political exercise more meaningful by ensuring the widest participation of Filipinos overseas.

“Those among us who are qualified are reminded of their sacred duty to vote for the kind of leaders who will lead the Philippines to the path of progress,” Ambassador Cuisia said in urging Filipinos to exercise their right to vote in national elections in the Philippines as provided for by Republic Act No. 9189 or the Overseas Absentee Voting Act or 2003.

“We are hopeful that we will receive the support and enthusiasm of all Filipinos in America,” he said, adding that the Philippine Embassy in Washington, D.C. and the Consulates General in New York, Chicago, San Francisco, Los Angeles, Honolulu, Guam and Saipan have made overseas absentee voting registration a key component of their consular outreach programs.

“We continue to exert efforts to reach out to our kababayans and impress on them the significant role that they play in molding our country’s future by choosing the leaders of our nation,” Ambassador Cuisia said.

Mar not affected by allies leaving LP for Duterte