‘Dancing Like the Stars,’ a great event with a noble cause/Neale Adams’ rare singing engagement

Once again, RSG Foundation’s “Dancing Like the Stars Part 3” held at the Omni Hotel last Saturday, was a smashing success. The event, benefits educational scholarship programs in San Miguel, Bulacan, which is the hometown of producer/entrepreneur, MaryAnn Ramos-Samadi.

The perky and humble MaryAnn was overwhelmingly emotional during her welcome speech, where she gratefully thanked everyone who came to support her cause. She also specifically thanked RSG Foundation’s Board of Directors for the collective effort they put in making the event a fruitful one. 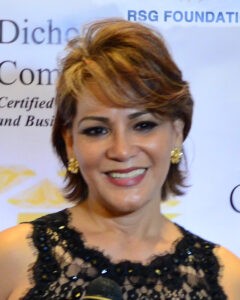 Annually, we are amazed at the various charity programs RSG Foundation has been involved in and as presented during the evening through a large, two-screen video presentation, we were all touched watching how indigent schoolchildren’s faces lit up whenever they receive school supplies, uniforms or even slippers enabling them to walk to school or participate in school programs. As MaryAnn has always claimed, she likes to “give back” because she once was a “poor kid growing up in her hometown.”

Surprise of the night was the vocal rendition of Dr.Tess Mauricio along with her brother Richard. The charming and pretty dermatologist belted it out like a real professional singer. Other vocal renditions followed were: Sharon Tanyag and Abby Cubey.

The dance competition was at best the Filipino version of the hit TV show, “Dancing With the Stars,” where there were judges involved. RSG Foundation’s event judges were: Joannie Feliciano (daughter of Dance King fame, Chito Feliciano of the TV show “Dance Time with Chito”); F. Lynn Mcmurray, actor/choreographer/professional dancer and cosmetologist/dance enthusiast, Bernard Litan. 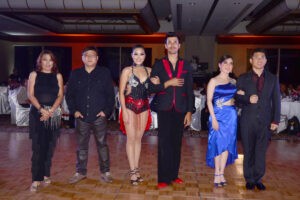 After the dance competition ceremonies, to the tune of its amazing DJ, the dance floor was packed for a couple of hours. Among those seen “dancing the night away” were: MaryAnn Samadi, Lou Razon, Precy Marte, Mary Maceda, Nora Amoroso, Val Villar, MaryAnn Cabasag, Joanne Wright, Mario Kasilag and numerous other dance enthusiasts. Indeed, “Dancing Like the Stars”:benefit event was quite an evening with a worthy cause.

In another part of town, newshen colleague Lydia Solis and this writer attended “An Evening with Neile Adams” at the Catalina Bar and Grill on June 25th.She has starred in several Broadway musicales, as well as numerous film and television appearances. She was formerly married to film idol Steve McQueen for 15 years and they had two children: daughter Terry who died from a liver transplant in 1998 and son Chad. She was also married for 25 years to Alvin Toffel, Air Force Pilot and Engineer of the Apollo Space Program until he passed away on March 3, 2005.

In her opening introduction, Neile Adams introduced herself as “part-Spanish, part English and part German” with no mention of her Filipino descent, though according to numerous published articles on her including Wikipedia, she was born as Ruby Neilam Salvador Adams, with her nickname as “Neile,” in Manila, whose mother was Carmen Sulse Salvador, a professional hula dancer and her father, Jose Salgado Arrastia, who passed away after she was born. Her father is the uncle of Isabel Preysler, mother of famous Spanish singer, Enrique Iglesias.

Neile was reported to have been born on July 10, 1932 and “she was left by her mother with her relatives for a short while in order to work abroad. Her lovely mother never married after her husband died, but had several gentlemen callers, among them was General Douglas MacArthur. She mother eventually came back for Neile during the Japanese occupation in the Philippines on December 7, 1941.Together, they spent three horrifying years interred in a concentration camp on the grounds of the University of Santo Tomas. But, in 1945 during liberation by the Allied Forces, she suffered shrapnel wounds to one of her legs, though she eventually recovered completely. Soon after they returned to Manila, her mother shipped her to the United States, where as a teenager, she attended Rosemary Hall, a private school in Connecticut.

Neile made her Broadway debut as a featured dancer in “Kismet,” but later became the lead dancer during its two-year run and in 1956, she was the Broadway star on “The Pajama Game.” She married then struggling actor Steve McQueen the same year while filming MGM’s “This Could Be The Night,” where she had a contract.

Among her screen credits with MGM were: Billy Wilder’s “Buddy, Buddy,” “Fuzz” opposite Burt Reynolds”Chu Chu and “Chu Chu and the Philliy Flash.” She has also appeared on numerous TV shows namely: “The Perry Como Show,” two “Bob Hope Christmas Specials,” The Pat Boone Show,” “Hollywood Palace,” and many other variety and TV shows where she has guested at the time.

Her dramatic appearances include: Alfred Hitchcock’s “Man From The South,” opposite her husband, Steve McQueen, Arthu Miller’s “One Grave Too Many,”

As someone who’s used to the limelight, the 83-year old Neile Adams is a total charmer on stage; she can still razzle dazzle her audience with her willowy voice and perky dance moves. She still promotes her book “My husband, My Friend” where she chronicles her romance with her famous husband, Steve McQueen, who became her soulmate and friend even after their divorce.

It was quite an experience watching Neile Adams, a Filipino-born actress/dancer who at her peak, was one of Broadway’s top-billed stars. Our thanks to the PR firm of Steve Moyer for their kind invite.