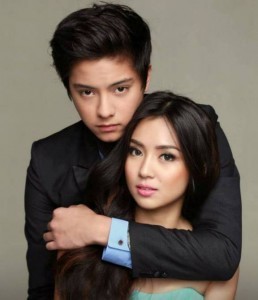 Daniel Padilla said his onscreen partner and rumored girlfriend Kathryn Bernardo has forgiven him after the circulation of an audio clip that triggered speculation about the teen heartthrob’s relationship with his film co-star Jasmine Curtis-Smith.

While the 19-year-old actor did not confirm that one of the voices heard in the viral clip was his, nor that the conversation pertained to Curtis-Smith, he admitted that Bernardo was hurt by the turn of events over the weekend.

He added that he has asked for Bernardo’s forgiveness.

In the secretly recorded audio clip, supposedly of Padilla’s conversation with a number of friends, a voice tagged as the actor’s seemed to express excitement about receiving a text message.

This triggered speculation that the “Sam” being referred to in the supposed “scandal” was Concepcion, who confirmed his relationship with Curtis-Smith in April.

While Padilla did not directly mention Curtis-Smith or Concepcion, Padilla asked his fans to refrain from further disparaging anyone’s name to supposedly defend his tandem with Bernardo.

Curtis-Smith has since confirmed exchanging text messages with Padilla, her co-star in the upcoming Metro Manila Film Festival entry “Bonifacio Ang Unang Pangulo.” The 20-year-old actress emphasized, however, that Padilla only asked about the condition of her father, James Earnest, who recently underwent an operation.

She also assured fans of Bernardo and Padilla that she has no intentions of getting in between the teen stars, who have openly showed affection for each other.

Admittedly, Padilla said he was disheartened by the “audio scandal.”

Turning serious, Padilla expressed regret that one of his friends could be the one who recorded their conversation and uploaded it online.

Padilla said the episode has strengthened him and that he has learned from it. The actor added he gets by by reminding himself that other people have worse problems to confront.