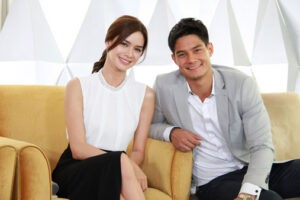 “Kayo na ba? Sagutin mo,” a follower addressed Matsunaga in a comment, to which the Brazilian-Japanese model replied, “Yyyyeeeesssssssss.”

In the past week, Matsunaga and Gonzales have been exchanging “I love you’s” in each other’s native language. Matsunaga grew up speaking Portuguese, while Gonzales’ mother tongue is Cebuano.

Gonzales and Matsunaga triggered a guessing game as to their status when they, after confirmation of the actress’ breakup with her businessman-boyfriend, started referring to each other romantically in posts online.

Dubbed “DanRich” by their followers — the two first worked together in March 2014 as guest co-hosts of “Kris TV” — Gonzales and Matsunaga further fueled speculation about their ties when the Brazilian-Japanese model introduced her to his mother.

Geralda Matsunaga called Gonzales “another gift from God for my family” and “my youngest daughter,” while the actress described Matsunaga’s mother as someone “beautiful inside and out.” (MNS)