Daniel on Heart: I knew we’d never get back together 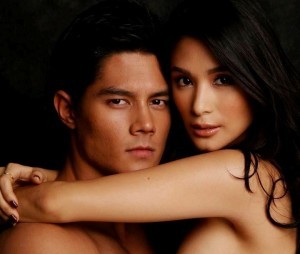 While it came to him as a surprise, Daniel Matsunaga was not hurt to find out that Heart Evangelista had just been engaged, saying he has long accepted there was no longer a chance for them as a couple.

The Brazilian-Japanese model learned of Evangelista’s engagement to Sen. Francis “Chiz” Escudero during a party celebrating the final night in “Pinoy Big Brother.”

Escudero proposed to Evangelista just a night before Matsunaga was proclaimed winner of the ABS-CBN reality show.

Matsunaga was asked if he was hurt over the news of the engagement, which generated buzz online and made headlines over the past weekend.

Matsunaga answered: “Not really, not really. Because for me, I knew that me and Heart would never get back together. By that time… But I’m really happy, because we’re still friends, you know.”

“Everything is doing really well, with her career also, to my career, so I’m really happy that we ended up good friends,” he said.

Citing “cultural differences,” Evangelista confirmed her breakup with Matsunaga in April 2012 after more than a year of being a couple. At the time, the actress had just spent a vacation in Matsunaga’s hometown in Brazil. She stressed, however, that his family was kind and accommodating to her.

Evangelista, 29, and Escudero, 44, became officially a couple on July 30, 2012, but the senator only confirmed that status of their relationship in October that same year.

The 25-year-old added: “With all my respect, they’re great. I wish them luck and everything good in their marriage.”

Asked if he feels “pressured” to get into a relationship following Evangelista’ engagement, Matsunaga said he is ready to start dating again. This, despite having two movies and a TV series to juggle in the coming months.

Aljur Abrenica still hopes to be friends with Kylie Padilla