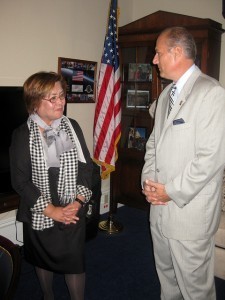 Justice Secretary Leila De Lima assures United States Rep. Tom Marino (R, Pennsylvania), that the Philippine Government is taking concrete steps to improve its human rights record during a courtesy call at Capitol Hill on Friday. Secretary De Lima is in Washington D.C. to brief American legislators, government officials and leaders of non-government organizations on the actions being taken by the Philippine Government to address human rights issues that have earlier been brought to their attention. (Photo by Ariel Penaranda) 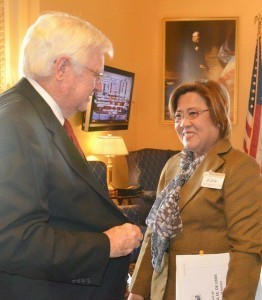 Justice Secretary Leila De Lima assures Rep. Harold Rogers (R, Kentucky), Chairman of the Committee on Appropriations of the United States House of Representatives, that the Philippine Government is taking concrete steps to improve its human rights record during a courtesy call at Capitol Hill on Friday. Secretary De Lima is in Washington D.C. to brief American legislators, government officials and leaders of non-government organizations on the actions being taken by the Philippine Government to address human rights issues that have earlier been brought to their attention. (Photo by Francisco Baraan)

WASHINGTON, D.C.—Justice Secretary Leila de Lima will recommend the creation of a high-level interagency task force that would focus on ‘cold cases’ of extra-judicial killings as part of the steps the Philippine Government will be taking to further improve the country’s human rights record, the Philippine Embassy said today.

In a statement, the Philippine Embassy said Secretary De Lima conveyed her plan at the Philippine Conference sponsored by the Center for Strategic and International Studies and the United States-Philippines Society here in Washington on Wednesday, 26 September 2012.“I will propose to the President the creation of a high-level interagency task force to focus especially on the cold cases of extra-judicial killings and try to come up with a list of all cases with high chances of successful prosecution,” Secretary De Lima said in response to a question raised by John Sifton, Asia Advocacy Director of Human Rights Watch, during the open forum that followed her remarks at the conference.Secretary De Lima said the task force she will be proposing will be on top of the other existing task forces that have been created to address extra-judicial killings and other human rights violations such as the Department of Justice Task Force, the Philippine National Police Task Force and the Task Force Usig.“Perhaps if there is an imprimatur from the President and we have all the right people who are committed, dedicated to do it, we can have accomplishments in the coming three years and yes we have a long way to go in addressing those past killings,” Secretary De Lima told Sifton.

Sifton was among the human rights advocates who attended a dialogue with her and Ambassador Jose L. Cuisia, Jr. at the Philippine Embassy on Monday, 24 September 2012. In that dialogue, the groups acknowledged that extra-judicial killings have gone down since President Aquino assumed office in 2010 but urged the government to take more significant steps such as prosecuting cases that occurred in previous administrations.

“The numbers continue to decline since two to three years ago up to the present. All the few cases that have been occurred since July 2010 or the start of current administration have been immediately investigated and therefore are under various stages of the legal process. Some are under preliminary investigation. Some are under trial,” the Secretary said. “We have charted fewer and fewer cases of extra-judicial killings and, for this year, although we are investigating a few cases, none have yet to be validated as extra-judicial killings.”

“The real challenge, especially for me, as former chairperson of the commission on Human Rights, is that I have to start from scratch in most of those cases because our investigative agencies in the previous administration simply failed to adequately investigate them,” she added.

Secretary De Lima explained in her remarks at the conference that extrajudicial killings are, by their very nature, difficult to detect, investigate and prosecute not because top government officials willingly or neglectfully promote a culture of impunity, but because the perpetrators, at their level, have the means and the opportunity to destroy any evidence that could implicate them, as well as intimidate or even eliminate witnesses who can identify them.

“That is especially true for cold cases that occurred during the previous administration, where co-conspirators have demonstrated the extreme lengths they are willing to go to just to hide their crimes, and their practices were not only tolerated, but in fact encouraged and rewarded in order to silence political dissent,” she said, citing the case of retired Maj. Gen. Jovito Palparan, Jr., who is now in hiding after he was charged for his alleged involvement in human rights abuses.

“Be that as it may, the most demonstrably effective measure taken by the present administration is inpreventing human rights violation cases from being committed at the hands of state agents,” she told the audience.

According to her, human rights awareness is now an integral part of the training and operational protocol in the Armed Forces of the Philippines (AFP) and the Philippine National Police (PNP). She said that efforts to improve chances for successful investigation and prosecution also include the establishment of Human Rights Affairs Offices in both the AFP and the PNP where victims or their families can file their complaints and expect immediate action.

“Another key measure is the keeping of a vibrant and open line of communications with other stakeholders, including NGOS, the Commission on Human Rights and even the academe, in finding ways in achieving a higher level of operational capacity in investigating and prosecuting human rights cases,” Secretary De Lima said.   ###

Who else thinks that the information...

MANILA, Jan 22 (Mabuhay) — Despite the travel restrictions due to the coronavirus disease 2019 (Covid-19) pandemic, foreigners with valid

MANILA, Jan 15 (Mabuhay) — The Philippines has extended the travel ban on countries with confirmed cases of B.1.1.7 SARS-CoV-2 variant, or
© Copyright 2011. All Right Reserved Balita Online | Contact Us