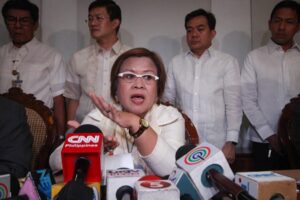 De Lima confirmed this to reporters via a text message on Monday, with a short “Yes” when asked to confirm reports that she would be leaving the DOJ on October 12, the start of the period for the filing of certificate of candidacy (COC) for those who want to run in the 2016 elections.

She, however, has yet to respond to questions on whether she would run for the Senate or when will she file her COC.

De Lima has reportedly confirmed her decision to run for the Senate in a television interview earlier in the day.

De Lima was at the Liberal Party (LP) gathering at Club Filipino in San Juan on Monday morning, where Camarines del Sur Rep. Leni Robredo officially accepted the offer to be the runnig mate of administration standard bearer Mar Roxas in next year’s elections.

The Justice secretary’s confirmation came a week after she revealed that Roxas had told her that the LP was including her on its senatorial slate. At the time, however, De Lima appealed to the public to await the LP’s official announcement first.

During the DOJ’s founding anniversary two weeks ago, De Lima said her late father, from whom she would always seek advice on major decisions, had already given her a sign. She, however, said that while she was “seriously considering” a senatorial candidacy, she could not yet say whether she was already “100 percent” sure.

In the latest Pulse Asia survey conducted between September 8 to 14 among 2,400 respondents, De Lima was tied with former Sen. Jamby Madrigal for the 12th spot.

A separate survey by the Social Weather Station, conducted between September 2 and 5 involving 1,200 respondents, showed her at No. 7. (MNS)

Ex-councilor admits up to P500,000 monthly payola from Binay