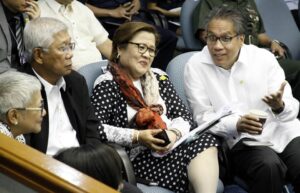 MANILA, May 1 (Mabuhay) – A party-list lawmaker has advised Justice Secretary Leila de Lima to resign if she was already too busy with other matters to attend to the filing of another batch of cases against the officials reportedly involved in the pork barrel scam and the Malampaya fund scam.

Bayan Muna party-list Rep. Neri Colmenares said it’s best for De Lima to turn over the reins of the Department of Justice (DOJ) to someone with more time on their hands to focus on filing the pork and Malampaya cases, especially since she is rumored to be eyeing a Senate seat in 2016.

“If the reason [for the delay of filing the cases] is she’s busy, it’s best for her to resign at ibigay ang posisyon sa gustong i-prosecute ang third batch ng mga officials sa pork scam,” he told reporters.

While stressing that De Lima has the right to run for office, Colmenares said her duties as Justice Secretary shouldn’t suffer because of her political plans.

The United Nationalist Alliance (UNA), however, slammed De Lima’s purported lukewarmness in filing the cases as he hit what appears to be the Aquino administration’s selective brand of justice.

Tiangco noted that De Lima isn’t apparently keen on sending Liberal Party members to jail even as the UNA claims knowledge that some of them received allotments from the Malampaya Fund, Priority Development Assistance Fund and Disbursement Acceleration Program (DAP).

He recalled that the DOJ had excluded 97 mayors who supposedly benefited from the P900-million Malampaya fund scam from the list of officials it charged before the Office of the Ombudsman.

Earlier this week, De Lima said she is uncertain if she can concentrate on filing of the third batch of pork barrel scam cases and the Malampaya scam case because there are other more “urgent” cases she had to personally attend to.

In November 2013, the DOJ filed the second set of charges against 34 individuals, which included former congressman Ruffy Biazon.

The DOJ also filed a plunder case in the Ombudsman against former President and incumbent Pampanga Rep. Gloria Macapagal-Arroyo, Napoles and 22 others in October 2013.

Based on reports that came out last year, among those who would be facing cases in connection with the pork barrel scam are Sen. Gregorio Honasan and Technical Education and Skills Development Authority (TESDA) Director General Joel Villanueva. De Lima, however, refused to confirm if these reports were true.

“Is he suggesting that the DOJ file a case against Sen. Honasan and Sec. Joel Villanueva even if the evidence is weak? He’s playing politics in every issue with the flimsiest of reasons,” he said. (MNS)

Beyond possible: The sky’s the limit for the all-New 2016 Prius at Wondries Toyota