(DEAD SEA, Israel-AFP) – Dawn over the lowest spot on earth illuminated a Dead Sea very much alive on Saturday, as more than 1,000 floating nude Israelis posed for a mass shoot by US photographer Spencer Tunick. 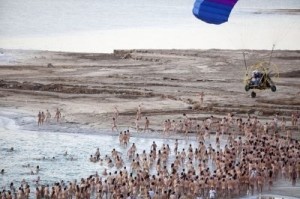 The project, Tunick’s first in the Middle East, is part of a bid to boost Israel’s campaign to have the salt-saturated feature recognised as one of the world’s seven natural wonders in a global online vote in November.

Experts warn that the Dead Sea could dry out by 2050 unless urgent steps are taken to halt its demise.

For Tunick, a Jewish American who has arranged naked human bodies over prominent landscapes and landmarks ranging from a Swiss glacier to the Sydney Opera House, a nude installation is an indicator of a host country’s openness.

Orthodox Jewish politicians and rabbis had protested over what they termed the “Sodom and Gomorrah” nature of Tunick’s work, and threatened to take legal action against the plan to strip in public.

The head of the local council in whose area the early-morning photo session took place had threatened to call police to disperse the shoot, which he said was offensive to local residents.

But organisers kept the location secret until the last moment to secure it, and there were no hitches to the two-hour session at the Mineral Beach complex, not far from where tradition says the biblical cities of Sodom and Gomorrah, irreparably overrun by sin, were destroyed by God along with their inhabitants. Tunick, who grew up in the largely Hassidic community of South Fallsburg, NY, said in the briefing that he could understand how religious people could find his work offensive.

“That’s why I’ve decided to do the work on Saturday (the Jewish Sabbath), so no-one would be walking by and see a naked person half a mile away and be offended,” he said.

The Dead Sea’s surface level is plunging by about a metre (39 inches) each year, and the shoreline has receded by more than a kilometre (0.6 mile) in places, according to some estimates.

For Ari Frucht, who initiated the project and has toiled over its preparations for the past four years, a work by Spencer Tunick could help raise awareness of the sea’s condition and galvanise Israel’s government into action.

He believes there is another aspect, too, to the Jewish state hosting such a shoot.

“The world needs to know that Israelis are not religious extremists,” he said ahead of the event.

Besides involvement in public disrobing, the installation provided Chai Amir, a 35-year-old resident of central city Bnei Brack, an opportunity to do something for a cause he believed in.

“I’m glad I was able to take part in an event aimed at saving the Dead Sea,” he said as the shoot wrapped. “You can really see how the waterline recedes every year.”

A jubilant Tunick praised the “brave” participants of his installation, some of whom flew to Israel especially for it.

“This could happen nowhere else in the Middle East,” he said as the event wound down, and the men and women headed to the showers and buses.