COTABATO, April 4, 2011 (AFP) – Hundreds of residents fled a remote Philippine village after 11 men including relatives of a powerful politician died in a clash with Muslim rebels, officials said Monday.

A 500-strong armored army unit deployed in the deserted village of Tenok on Monday, a day after the clash, to keep about 150 gun-wielding clan members and 130 guerrillas apart, said local military spokesman Colonel Prudencio Asto. 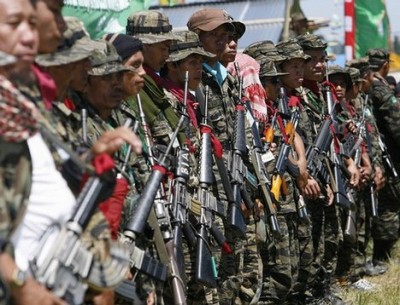 “They would not want to engage our people, who are fully equipped and can even call on air support if needed,” Asto said.

Sunday’s firefight killed 10 supporters of Esmael Mangudadatu, governor of Maguindanao province, including an uncle and four other kin, while the rebels suffered one dead and three wounded, according to an updated official toll.

Maguindanao has been riven by Muslim separatist rebellion, warlordism, and deadly blood feuds for years, making it one of the poorest and most violent provinces of the Philippines.

Mangudadatu’s wife and several relatives were among 57 people killed in the country’s worst political massacre in November 2009.

“The area of Tenok is now vacated by civilian populace,” Asto said. The rural village had about 900 residents.

However both the government and rebels, which are observing a ceasefire, said Sunday’s fighting was not linked to the MILF’s decades-old campaign for an independent state.

“I am waiting for a more detailed report from them (military). But they tell me that they are on top of the situation,” Aquino added.

“Apparently we were provoked because of an existing ‘rido’,” Kabalu said, using the local term for blood feuds among Muslim families that can lead to so-called honour killings stretching over several generations.

The insurgency has left 150,000 people dead according to some estimates.