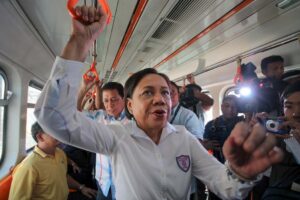 Senator Cynthia Villar, principal sponsor of the law extending the corporate life of Philippine National Railways (PNR) to another 50 years, rides the train during an inspection on Friday. The PNR will reopen the line from Tutuban to Sta. Rosa, Laguna after a mishap in April suspended operations. (MNS Photo)

Manila, Philippines (AFP)  – The Philippine capital’s decrepit train network will start issuing certificates of delay to tens of thousands who are late for work because of daily breakdowns, the government said Tuesday.

With only seven trains for half a million passengers, Manila’s Metro Rail Transit (MRT) is a commuter’s nightmare, and creaking locomotives stop mid-track increasingly frequently.

“This is a transparency measure. People deserve to know what problems occurred, anything that could cause a stoppage from a broken rail to air-conditioning that stopped working,” transportation department spokesman Michael Arthur Sagcal told AFP.

The “incident report”, however, will only certify the cause of the delay and will not be worded as an excuse letter for tardiness, Sagcal said.

“It’s up to the requesting individual how to use it,” he said, when asked if the document could be used as an excuse letter.

The decaying MRT is also dangerous. In August last year, dozens were injured after one train overshot its track and rammed into a busy highway.

A multi-billion dollar infrastructure overhaul plan by President Benigno Aquino has moved painfully slowly, and only one year remains before he steps down next June.

When it opened in the late 1990s, the MRT had 20 running trains, each with three cabs, but years of neglect, aggravated by wrangling between the government and its private partner, have reduced this number to seven.

“We understand the frustration of the public… We are doing the best we can but solutions are not overnight,” Sagcal said.

A prototype of the 48 new trains that the government plans to install by next year will be tested in November and rust-eaten rails will be replaced within the year, he said.

But regular MRT riders are not impressed with the new plans.

Instead of issuing late notes, the government should just focus on repairing the train line, said Francin Cruz, a 25-year-old advertising art director.

Cruz stands in line for up to three hours every night for a 25-minute train ride from work to her house. She has given up taking the train during the morning rush hour.

“I will not fall in line again with the same number of people just to get an excuse slip,” Cruz told AFP.
The left-wing opposition group Bayan called the government’s move “downright insulting”.

“Commuters do not need excuse slips. They need improved services. They need the trains to stop breaking down all the time,” Bayan Secretary General Renato Reyes said.

And even the MRT’s general manager, Roman Buenafe, admitted on television that getting an “incident report” could take a few days, as technical personnel check the cause of delay.