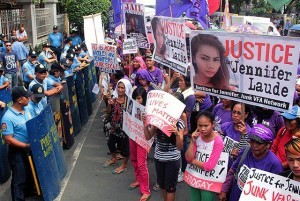 Members of ProGay and women’s rights group Gabriela rally in front of the Supreme Court in Manila on Tuesday, November 25, to denounce the alleged government inaction on violence against women. The rally was held just as the high court was on its second day of oral arguments on the constitutionality of the PHL-US Enhanced Defense Cooperation Agreement. (MNS photo)

MANILA (Mabuhay) — The defense for Lance Corporal Joseph Scott Pemberton will present Tuesday forensic expert Dr. Raquel Fortun as its last witness, in the hopes of establishing that the US servicemen did not kill the Filipino transgender woman Jeffrey “Jennifer” Laude.

Fortun is expected to strengthen the forensic evidence presented by Pemberton’s camp to prove that he did not commit the murder.

In his testimony before the court on Monday, Pemberton admitted to choking and dragging Laude.

The US serviceman claimed that after having oral sex with Laude at a lodging house in Olongapo City, he felt the transgender’s genitals and pushed the victim out of shock.

Pemberton said Laude slapped him on the face, which led him to choke her until he noticed that the Filipino was unconscious.

He said he dragged Laude to the bathroom to run water from the shower over her to help her regain consciousness, but there was no water, so he went out of the room.

The defense believes that other people may have entered the room after Pemberton stepped out, the report said.

Forensic results from the Philippine National Police crime laboratory said Laude passed away past midnight of Oct. 12, 2014, which the defense claims is inconsistent with testimonies made by Pemberton and other witnesses that the US serviceman left the room at around 11:30 p.m. of October 11.

After Fortun’s testimony and cross-examination, Pemberton’s camp is expected to rest its case, after which the case may be up for promulgation before the Olongapo City Regional Trial Court Branch 74.(MNS)