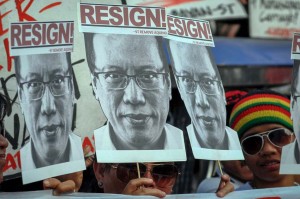 Members of a militant group troop to the U.S. embassy in Manila on Tuesday to protest the alleged participation of U.S. forces in the Mamasapano incident and to ask President Aquino to resign. The group was reacting to reports of presence of unmanned vehicles at the scene of the clash. (MNS photo)

Secretary Teresita Deles, presidential adviser on the peace process, told a group of evangelical Christians at a forum on Monday that President Aquino’s critics had always wanted to put him down even before the Mamasapano fiasco happened.

The deaths of 44 elite cops in an encounter with rebel forces on January 25 in Mamasapano, Maguinanao has imperiled the fate of the BBL, a proposed law that seeks to create a new Muslim-led autonomous region in Mindanao after decades of armed conflict.

The incident also caused President Aquino’s popularity to drop to record lows and led to calls for his resignation.

Without naming names, Deles said various groups “have been looking for opportunities to find an issue that would be thrown at the President, that would weaken him, and if possible, shorten his term.”

The perfect opportunity was the Mamasapano incident, she said.

“Everything has been used. Lies, deliberate misinformation,” Deles said. “There’s the public shaming of people who have been defending the peace process and standing up for it.”

He said that if the bill is not approved by June 2015 – the deadline that leaders of the Senate and House of Representatives had set – it would be hard to tell when it will ever be passed.

“We are decommissioning our firearms. But until the BBL is passed and implemented, we will hold on to our firearms,” he said.

Amid doubts on the MILF’s sincerity and criticisms on the bill, Senate and House deliberations on the BBL will resume this month.

Although the BBL’s timetable has been shortened because of the Mamasapano incident, Deles said the Bangsamoro government can still be formed in time for the 2016 elections.

Should Congress approve the measure in June, a plebiscite on the BBL would be held in September, she said. The Bangsamoro Transition Authority, the proposed region’s interim government before leaders are elected, will hold office from October 2015 to June 2016.

“We never said it could not be touched,” she said. “What we will fight for is that the CAB provisions should not be diluted in the BBL.” (MNS)