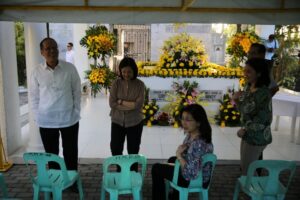 MANILA, Oct 31 (Mabuhay) — As Filipinos flock to cemeteries all over the country to observe Undas (All Souls’ Day), the Department of Environment and Natural Resources reminded them to keep the graveyards clean and free of trash.

“We call on those who will pay their respects for their dead to also respect the place of their burial by not making a dump site out of graveyards during their visit,” DENR Secretary Ramon J.P. Paje said in a statement on Saturday.

According to the Metropolitan Manila Development Authority, some 140 truckloads of garbage are usually collected from various Metro Manila cemeteries during All Saints’ and All Souls’ Days.

On the other hand, the DENR urged the local government units to enforce the Ecological Solid Waste Management Act or Republic Act No. 9003 to reduce the amount of trash at cemeteries during Undas.

Paje also urged families to bring their own garbage bags and to segregate their trash.

“The number of ways to help the environment is practically limitless, and we are relying on the Filipinos’ ingenuity to affirm this, not only during traditional celebrations but every day,” he said.

Earlier, environmental group EcoWaste Coalition appealed to visitors at cemeteries to dispose of their trash properly, noting that a total of 834 tons of trash were colected from Metro Manila’s 21 cemeteries in last year’s observance of Undas. (MNS)